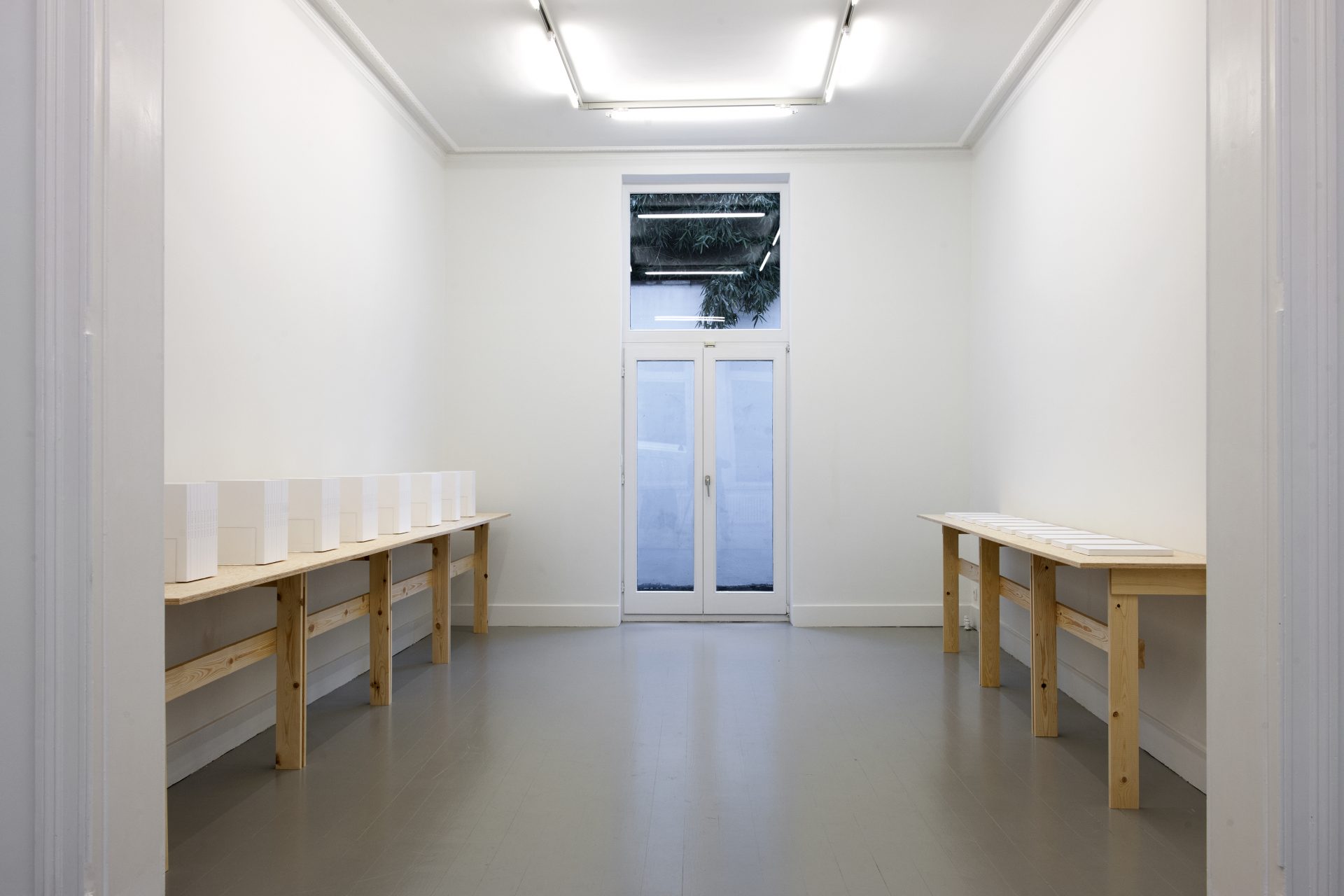 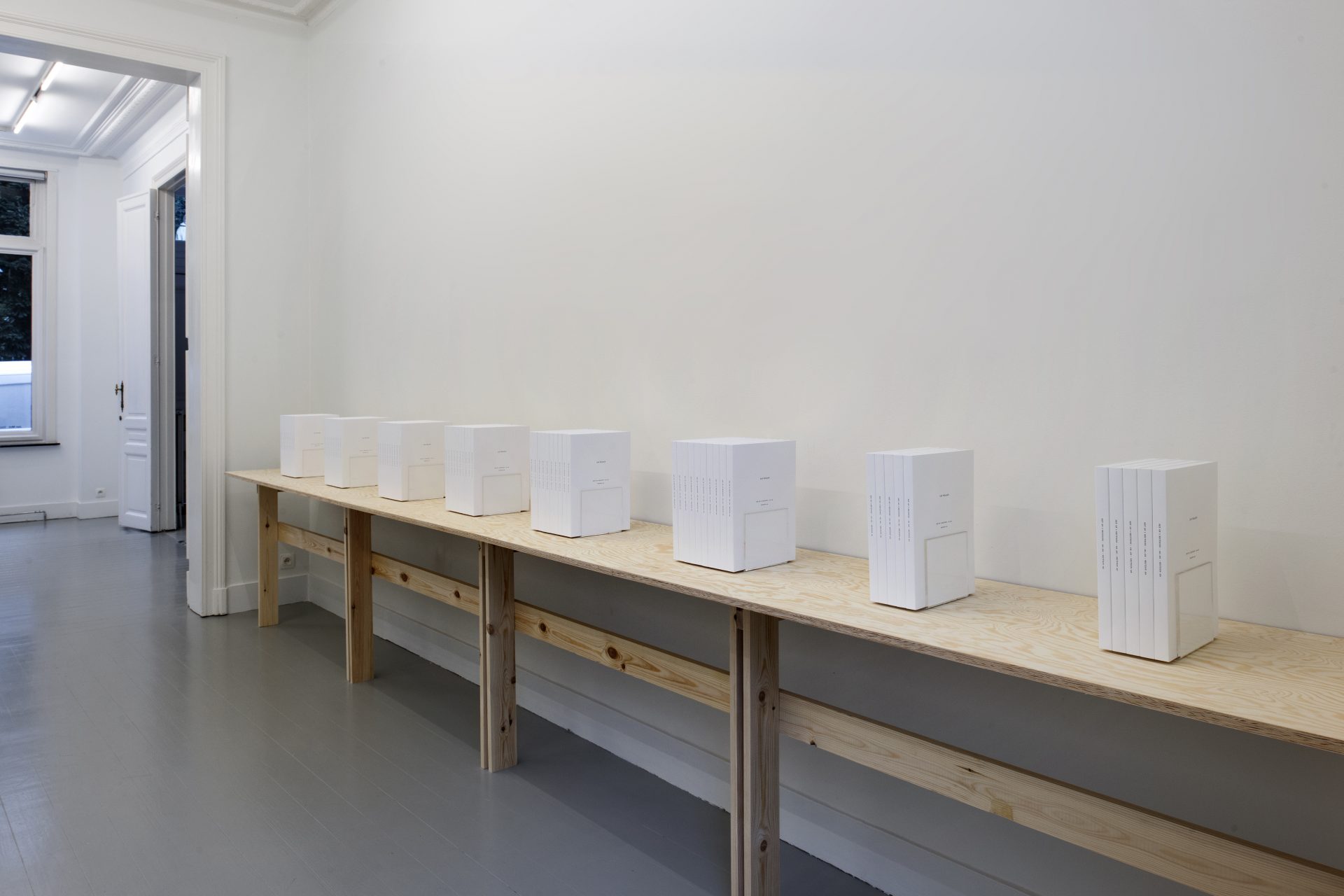 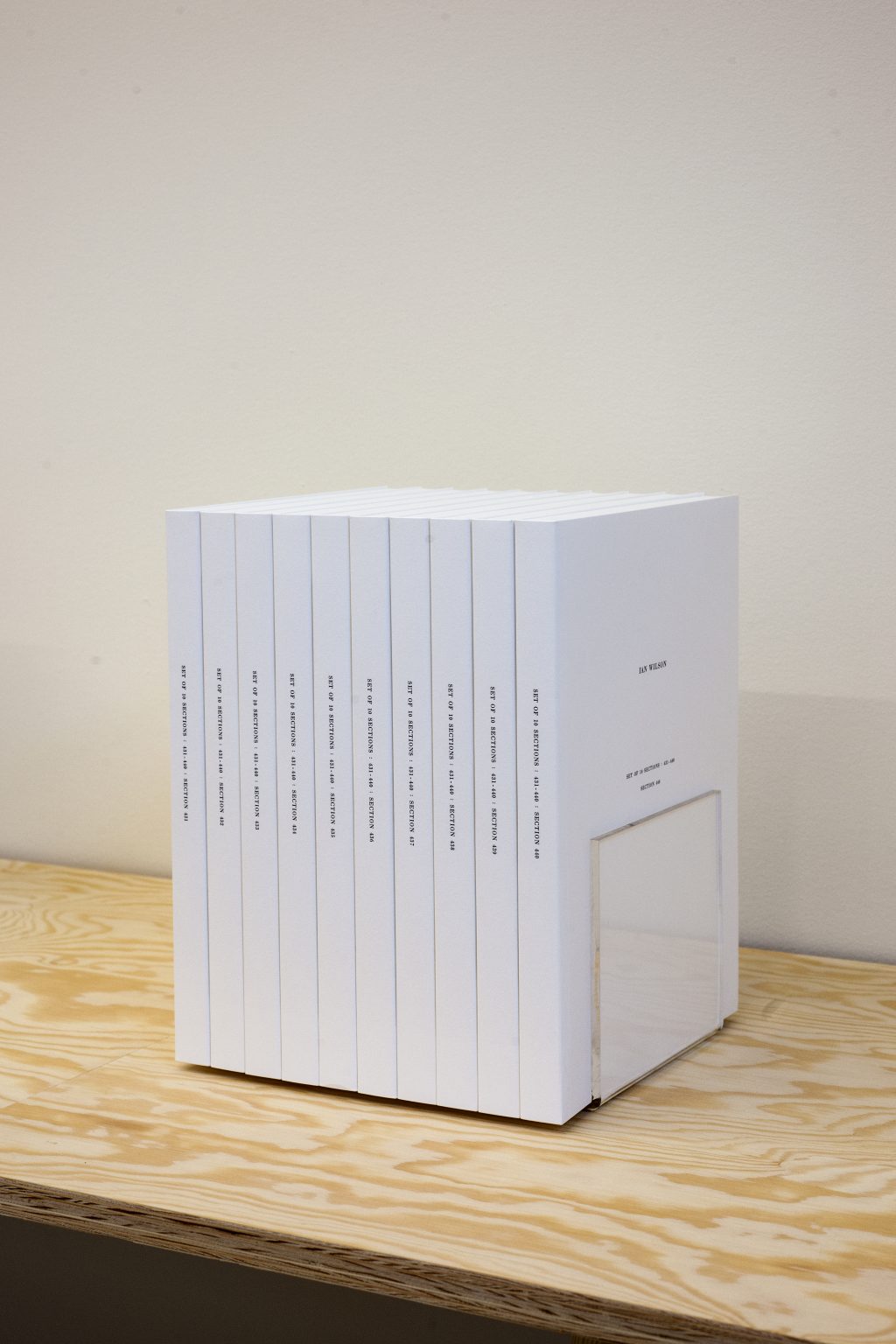 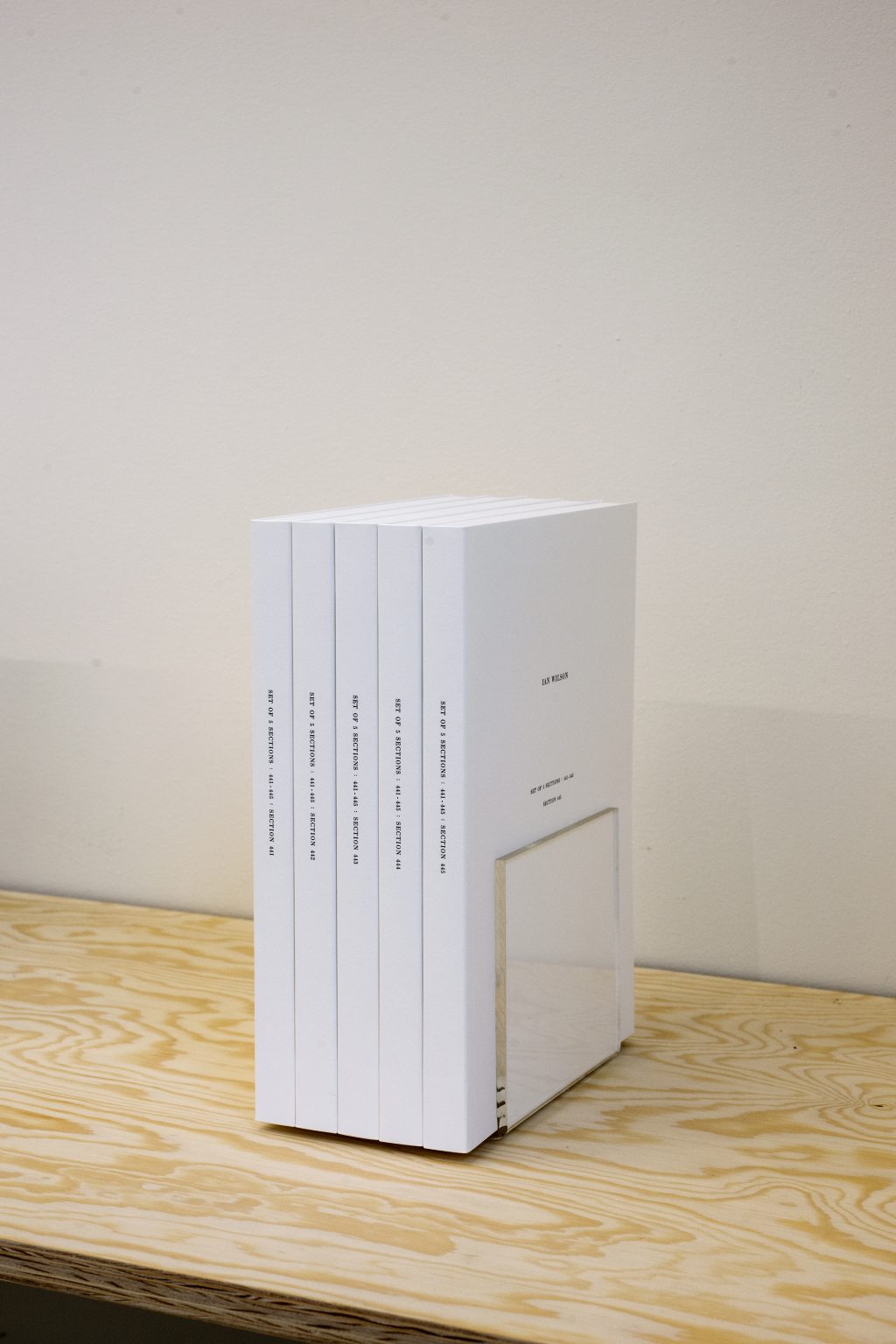 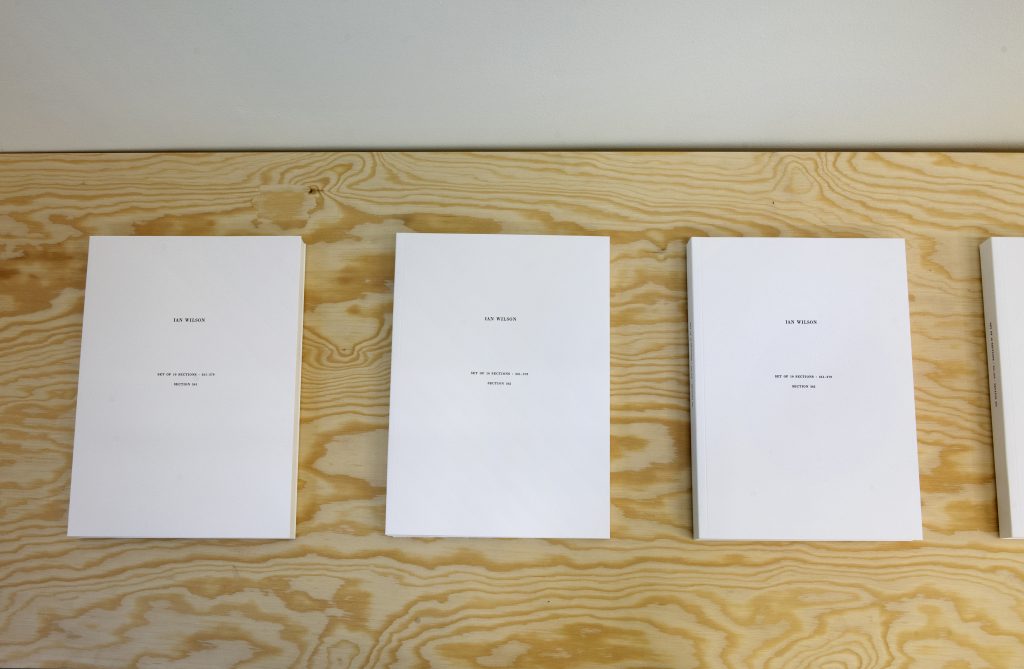 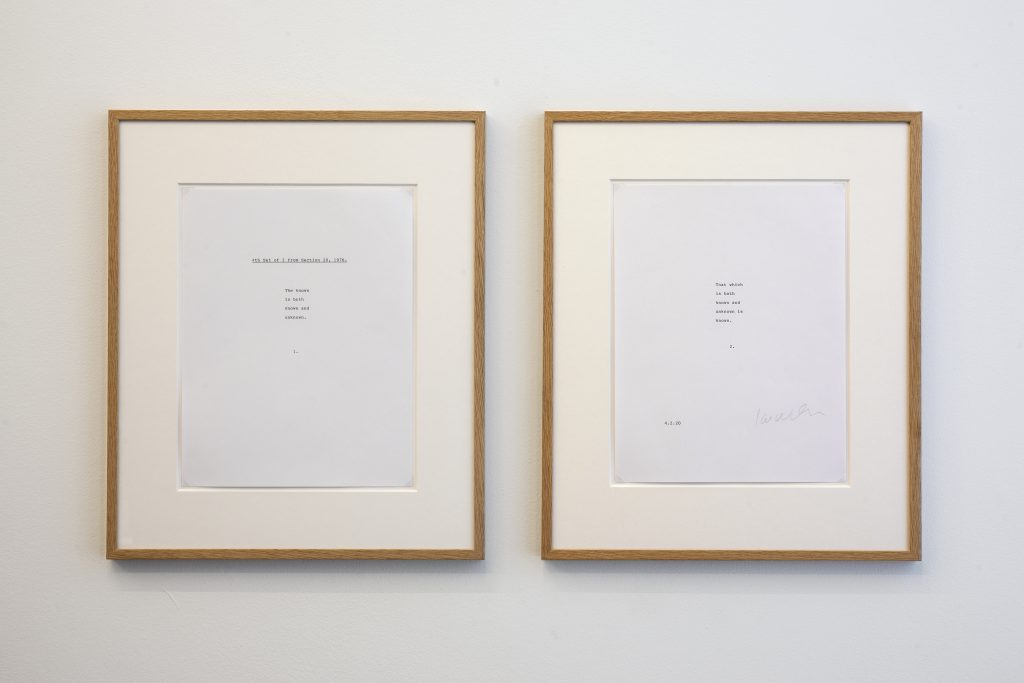 Conceptual art is not about ideas. It is about the degree of abstraction of ideas.
(Ian Wilson, Conceptual Art, Artforum, Feb. 1984)

In the center of the presentation are nine sets of unique, never before presented books and the last produced within the artist’s lifetime. These Sections dating from 2014 all carry one sole word on each page: Perfect. The exhibition was conceived together with Ian Wilson and will be the first presentation at the gallery since the artist passed away in April 2020.

Ian Wilson conceived Section 1 as early as 1971 and published these numbered artist books from the 1980s onwards. He described the production of these books as a research to see what he could do as an alternative to speech. Wilson first experimented with the concepts of the known and unknown, and subsequently reduced to using the same text throughout an entire book: ‘unknowable,’ ‘absolute knowledge’ and since 1993 ‘perfect.’ These explorations helped him formulate the concept of ‘pure awareness’ which became the central notion of his Discussions. In the beginning, the books were published in an edition of 500. From the 1990s Wilson started producing Sections as unique books composed in sets of between 5 and 26 books each. Sections were published by various institutions including Van Abbemuseum, Kunsthalle Bern and by private patrons such as Giuseppe Panza di Biumo, Robert Ryman, amongst others.

The use of the word ‘perfect’ is correlated with Ian Wilson’s definition of conceptual art which according to him was about the degree of abstraction of ideas. In his work he was interested in going beyond visual abstraction and he perceived the preoccupation with abstraction as a way of trying to express the truth as directly as possible. Circle on the floor and Circle on the wall (both 1968) made him realize that oral communication can replace the production of objects. Similar to these two seminal works conceived as unlimited editions, Sections evoke the abstract notion of infinity through their continued numbering and the quasi endless repetition of the same word(s). After abandoning the production of tangible objects in the late 1960s, Wilson shifted his attention to ideas that akin to ‘perfect’ cannot be pictorially rendered, and instead of a form or shape, represent a concept. ‘Perfect’ might be the most pertinent of them for it being the essence of all ideas.

Ian Wilson (1940-2020) was born in South Africa and since the 1960s lived in the US. Wilson’s work has been presented worldwide including in seminal exhibitions of conceptual art such as “557,087” at the Seattle Art Museum Pavilion in Seattle, organized by Lucy Lippard in 1969; “Information” at the Museum of Modern Art in New York in 1970; “Arte de Sistemas” at the Centro de Arte y Communication in Buenos Aires in 1971; “L'art conceptuel, une perspective” at the Musée d'Art Moderne de la Ville de Paris in 1989; “1965–1975: Reconsidering the Object of Art,” at the Museum of Contemporary Art in Los Angeles in 1995; as well as in significant exhibitions such as documenta in Kassel in 1982. Wilson’s major solo exhibition accompanied by a catalogue raisonné was organised by the Van Abbemuseum in Eindhoven, together with MACBA in Barcelona and MAMCO in Geneva in 2008. The Dia Art Foundation organised a number of Discussions in Beacon and Chelsea between 2011-2015. In 2017 Ian Wilson had a solo presentation at the KW Institute for Contemporary Art in Berlin while Tate Modern hosted the last public Discussion with the artist in May 2017.