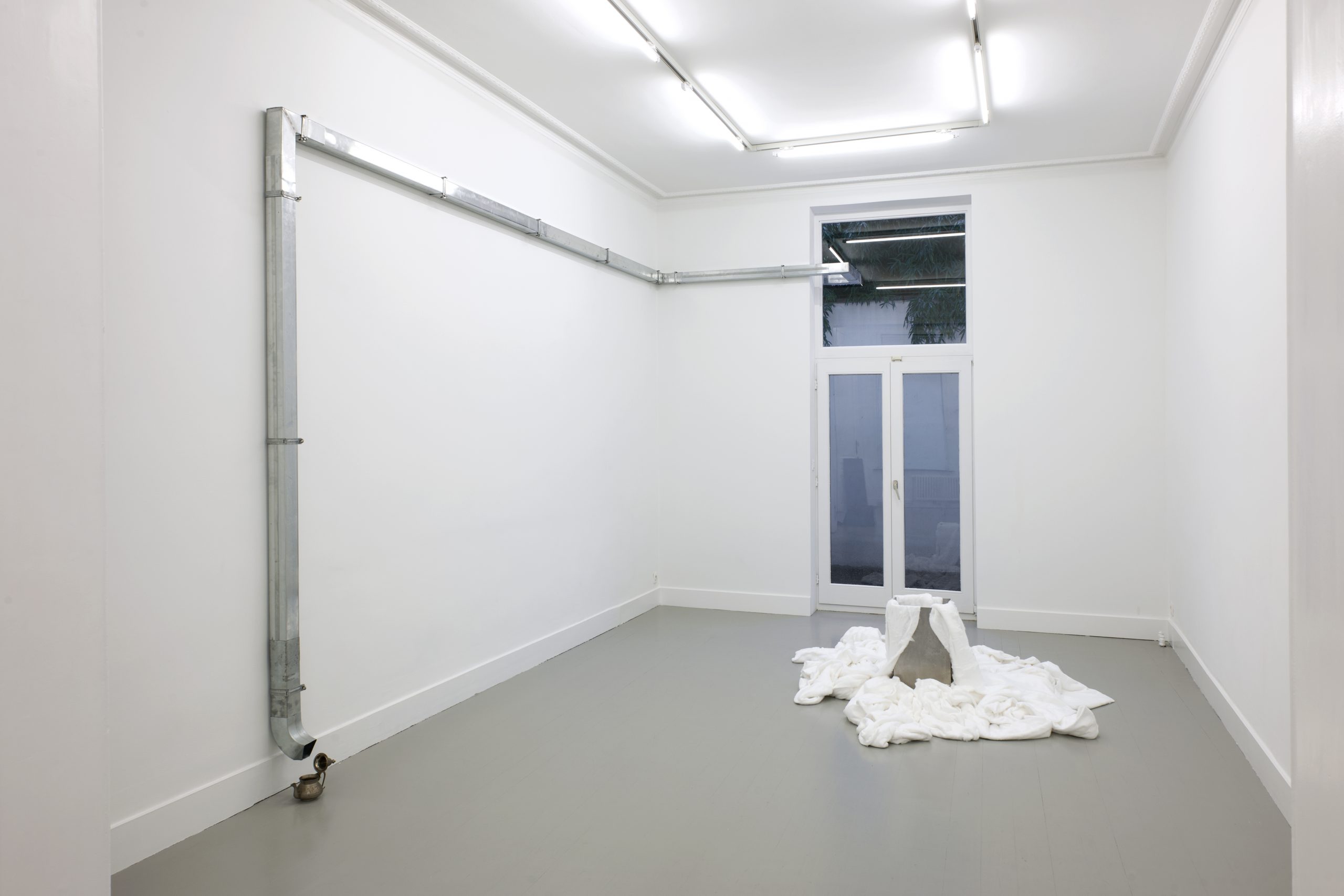 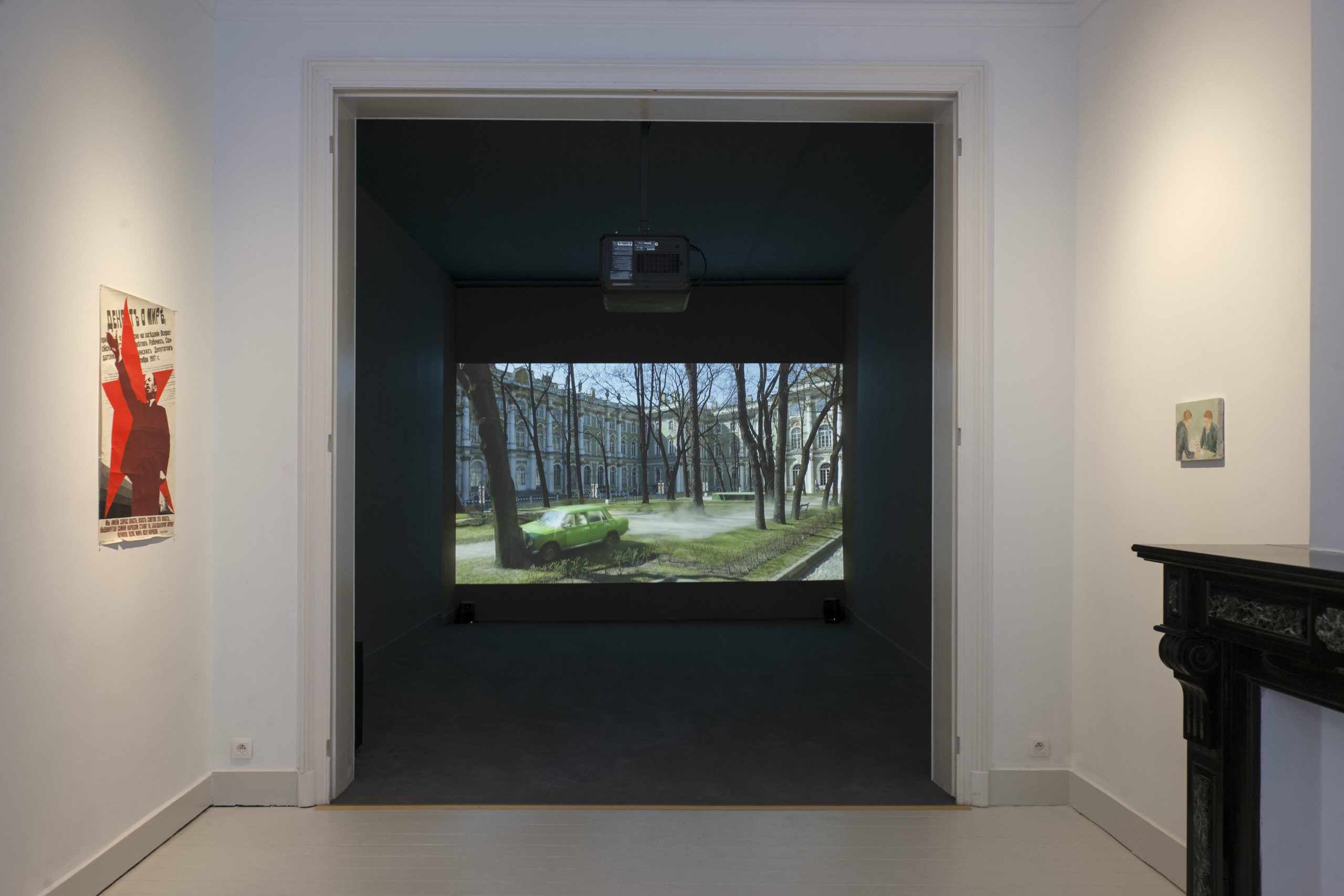 Francis Alÿs
Without an Ending There is no Beginning 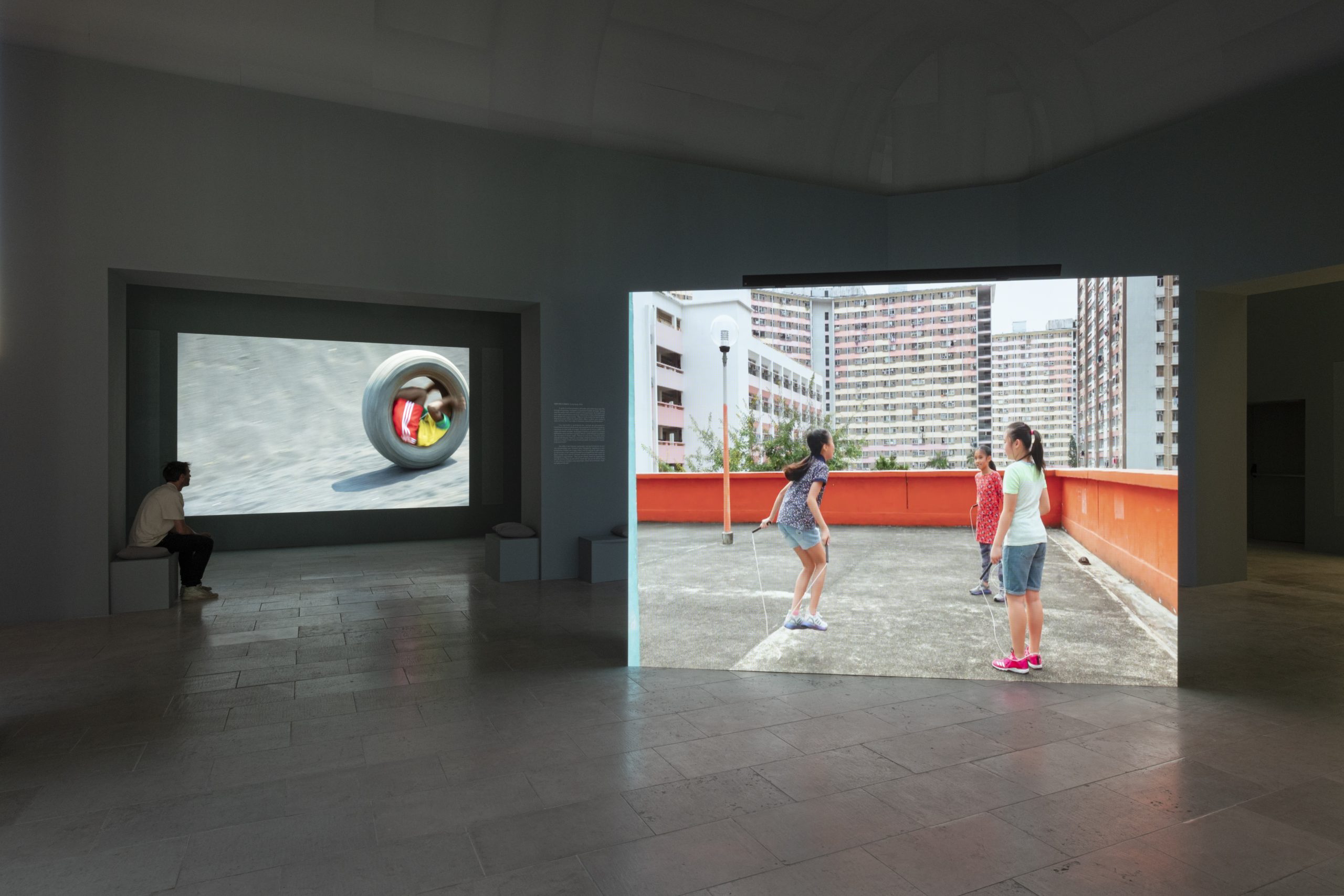 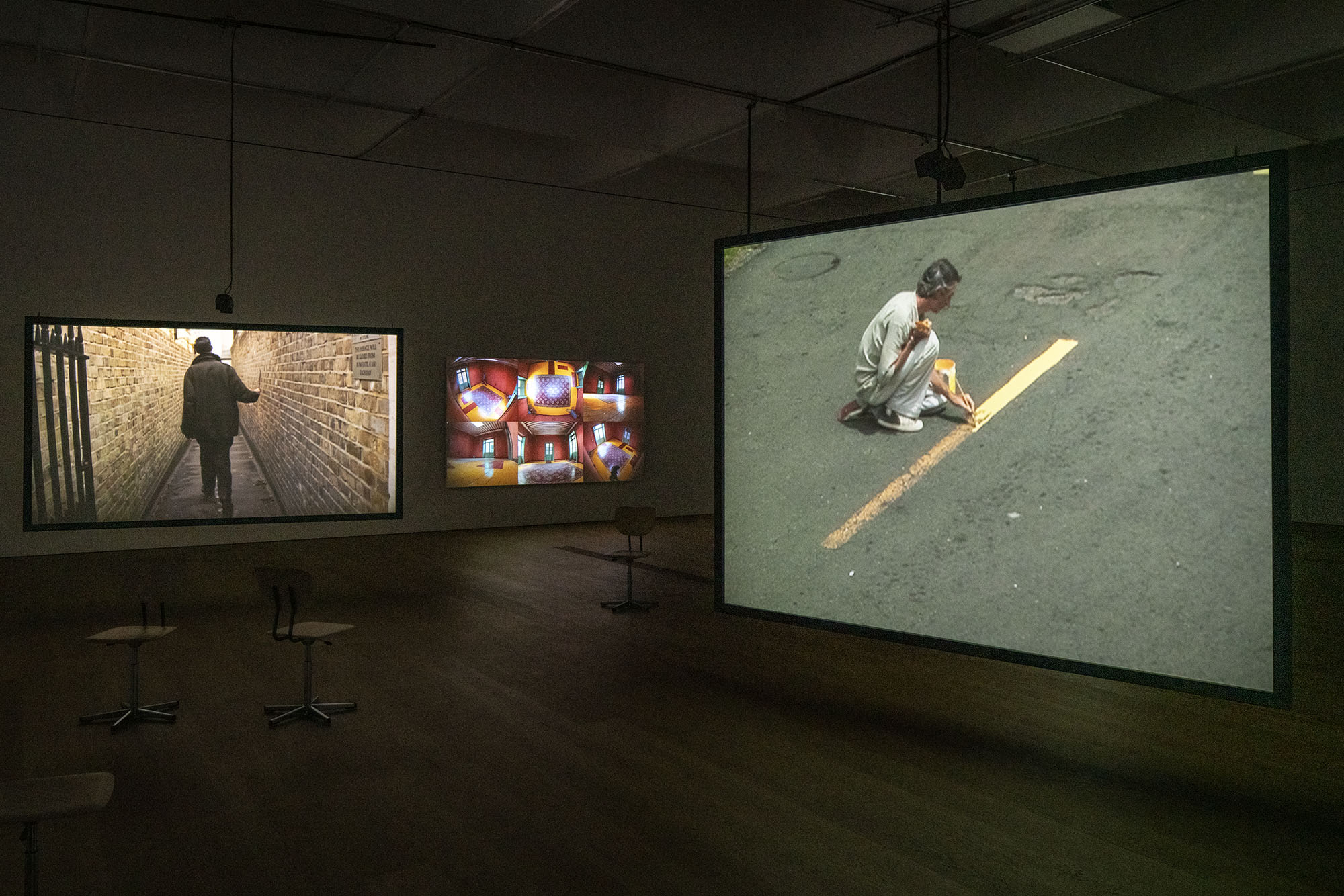 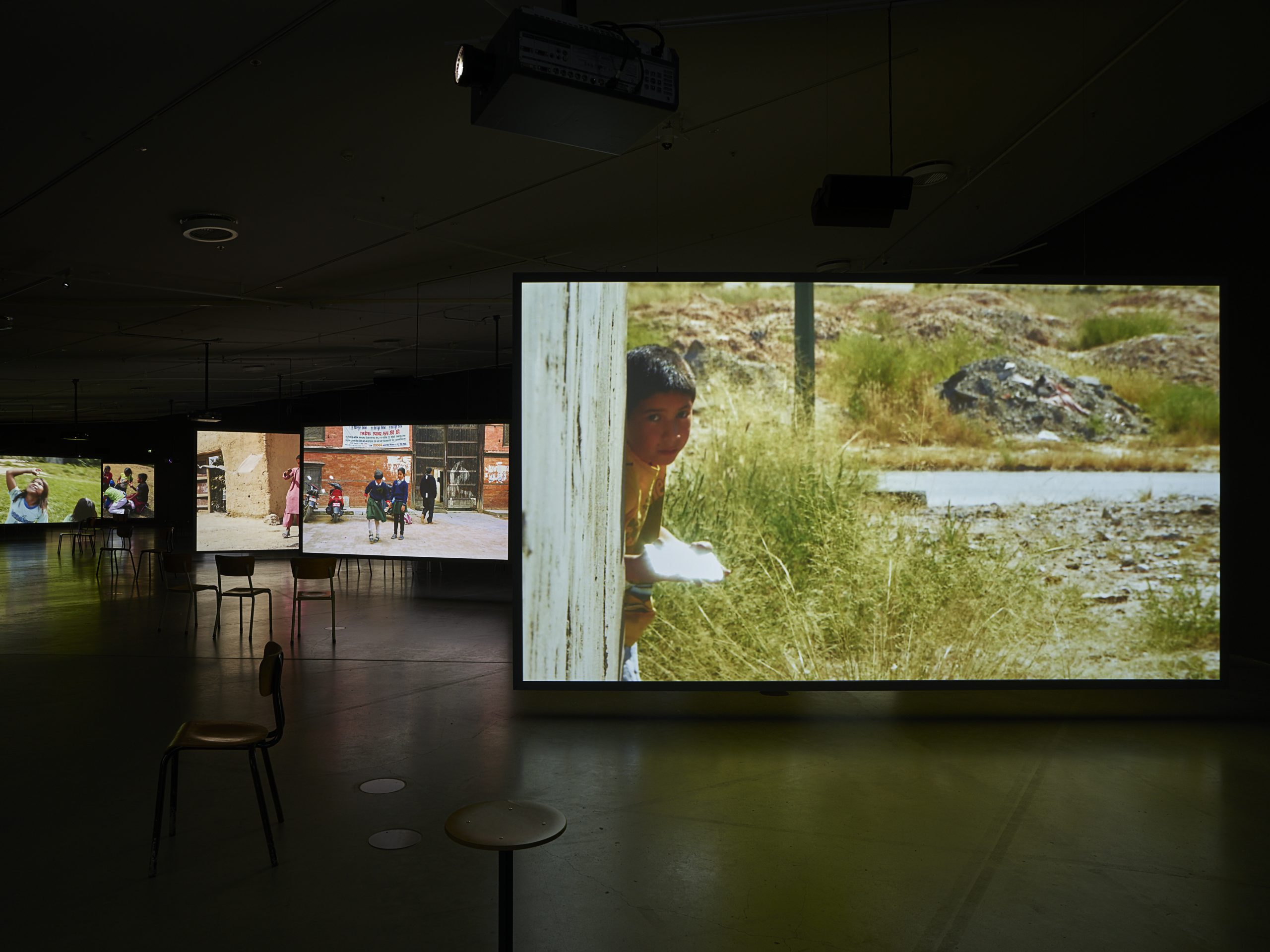 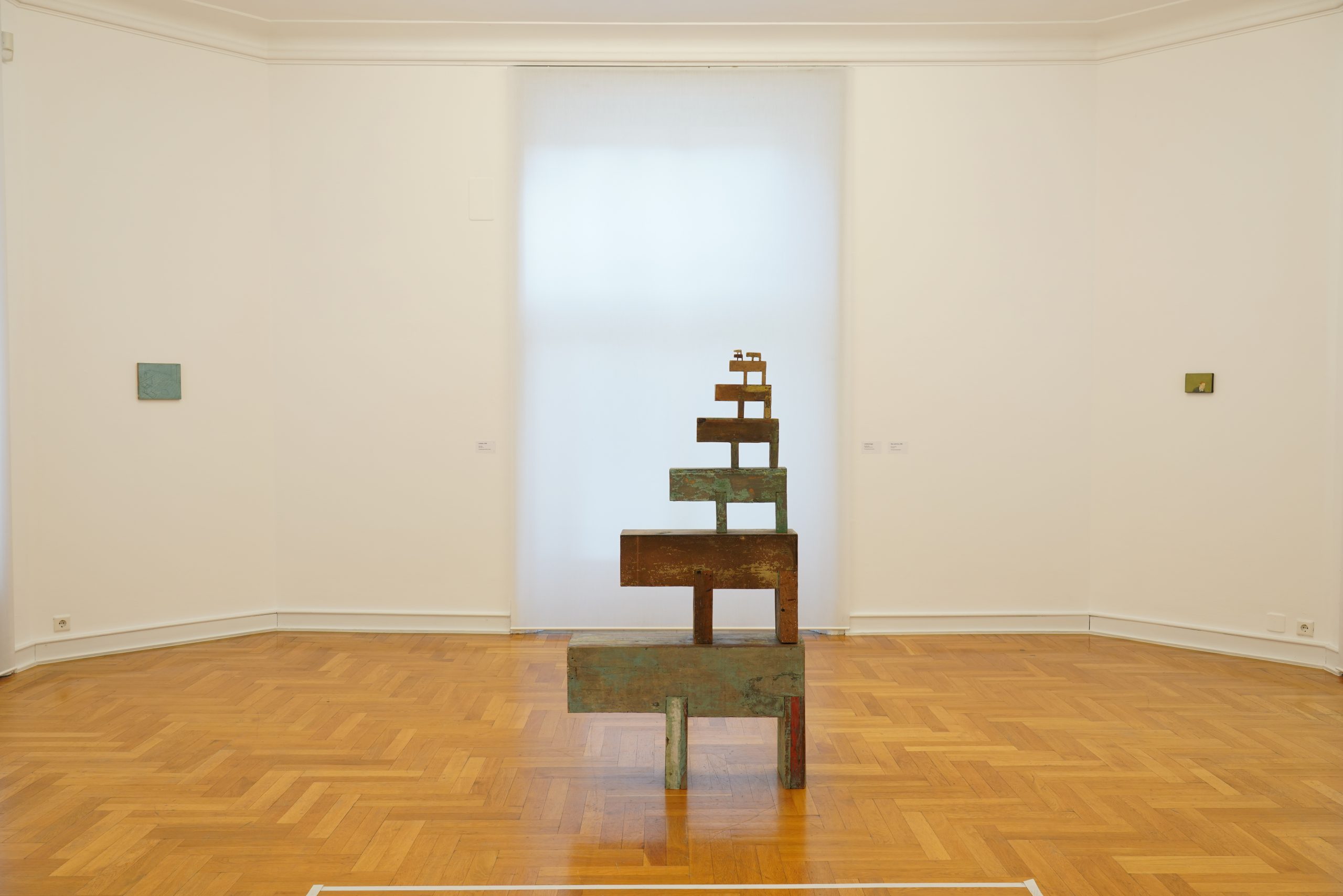 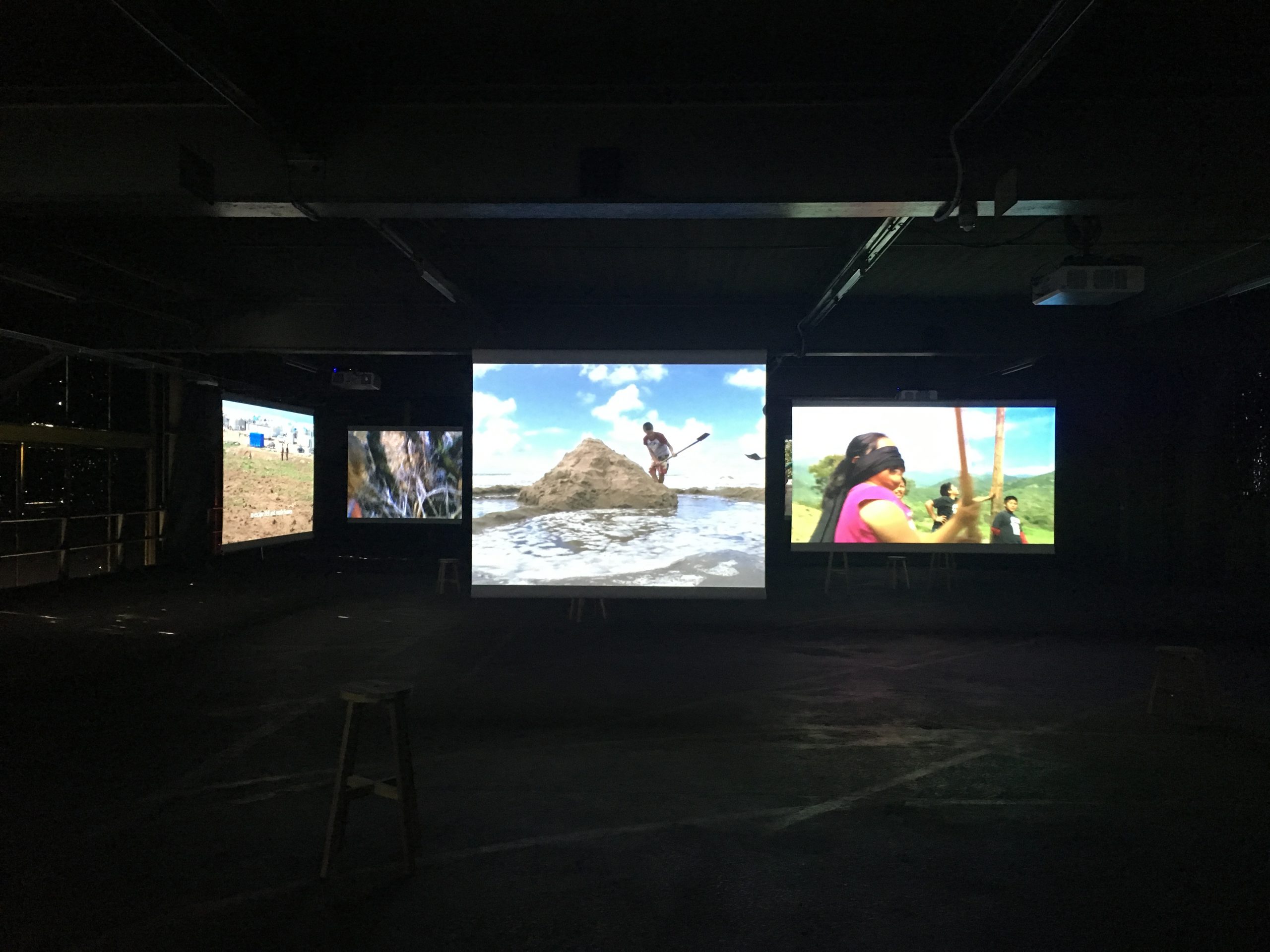 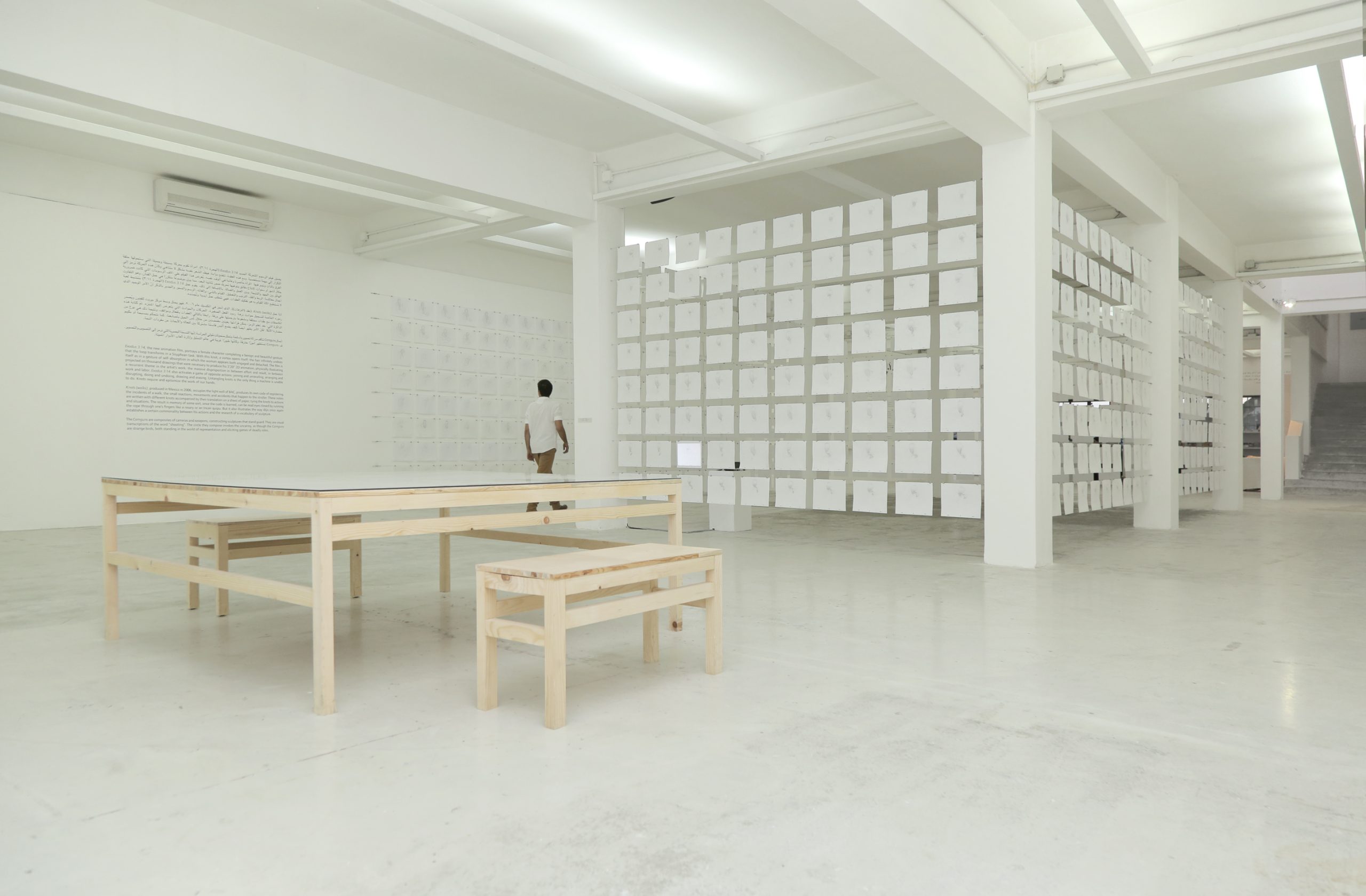 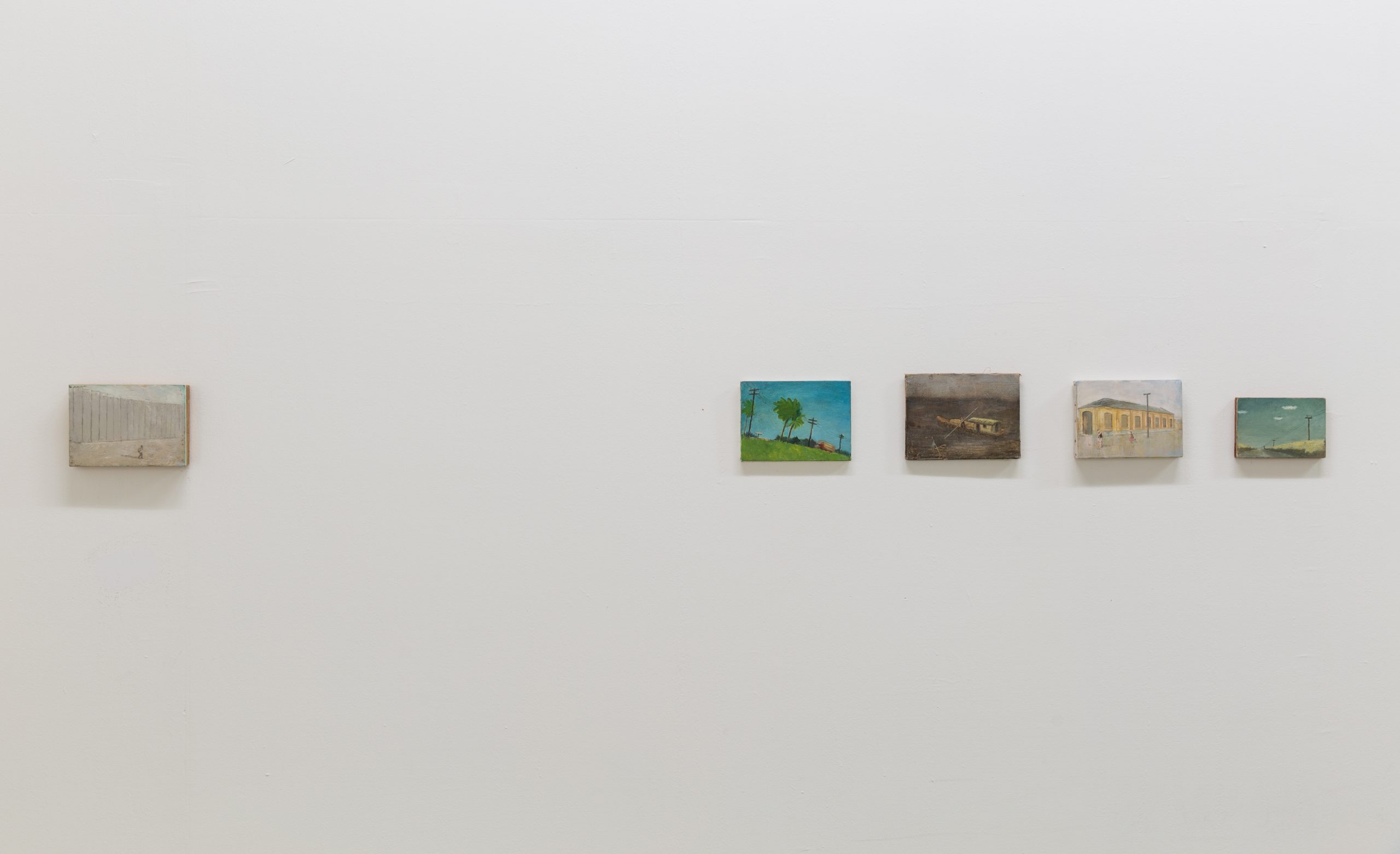 Gestures and Archives of the Present, Genealogies of the Future.
Tapei Biennale, 2016 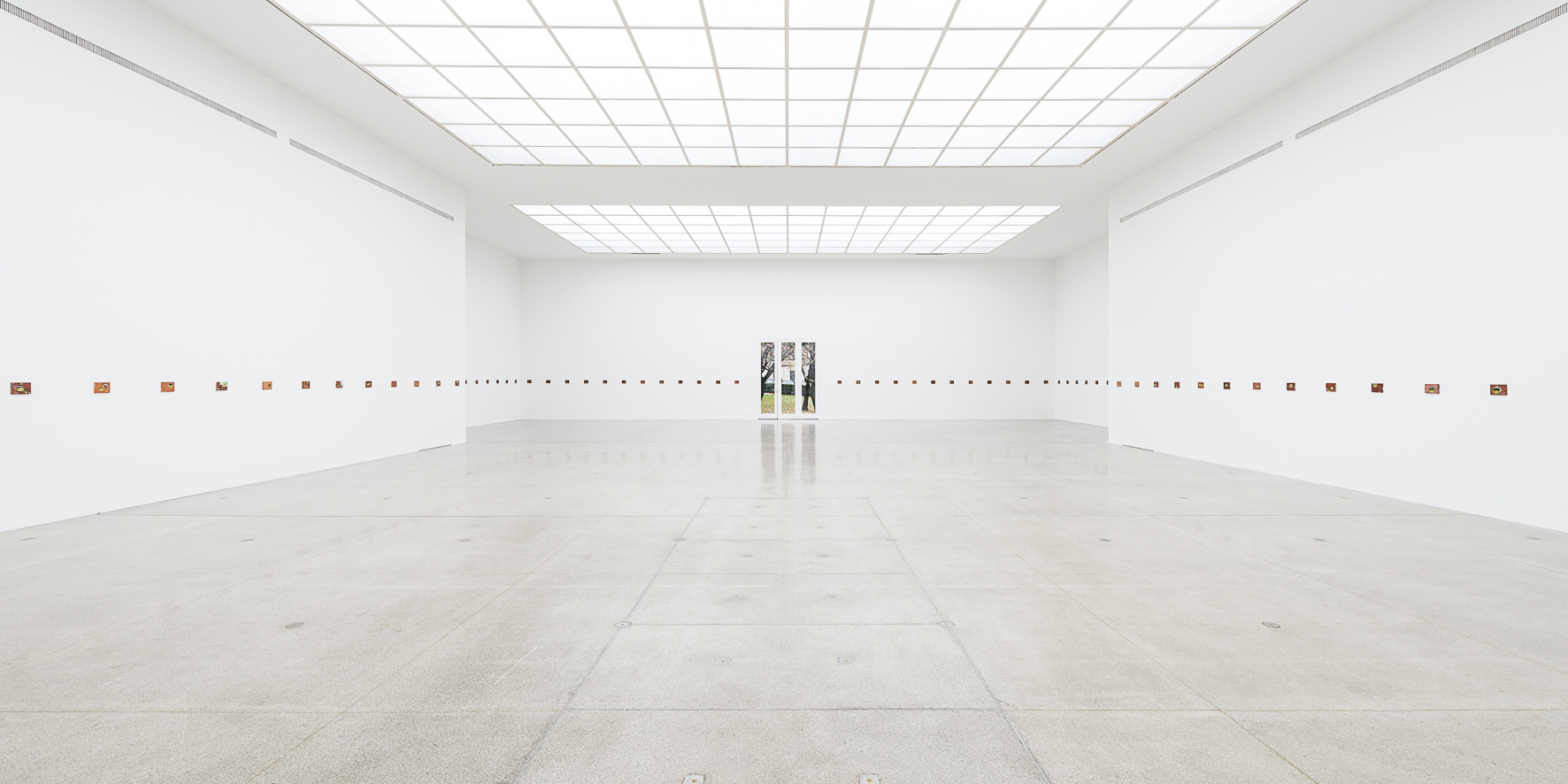 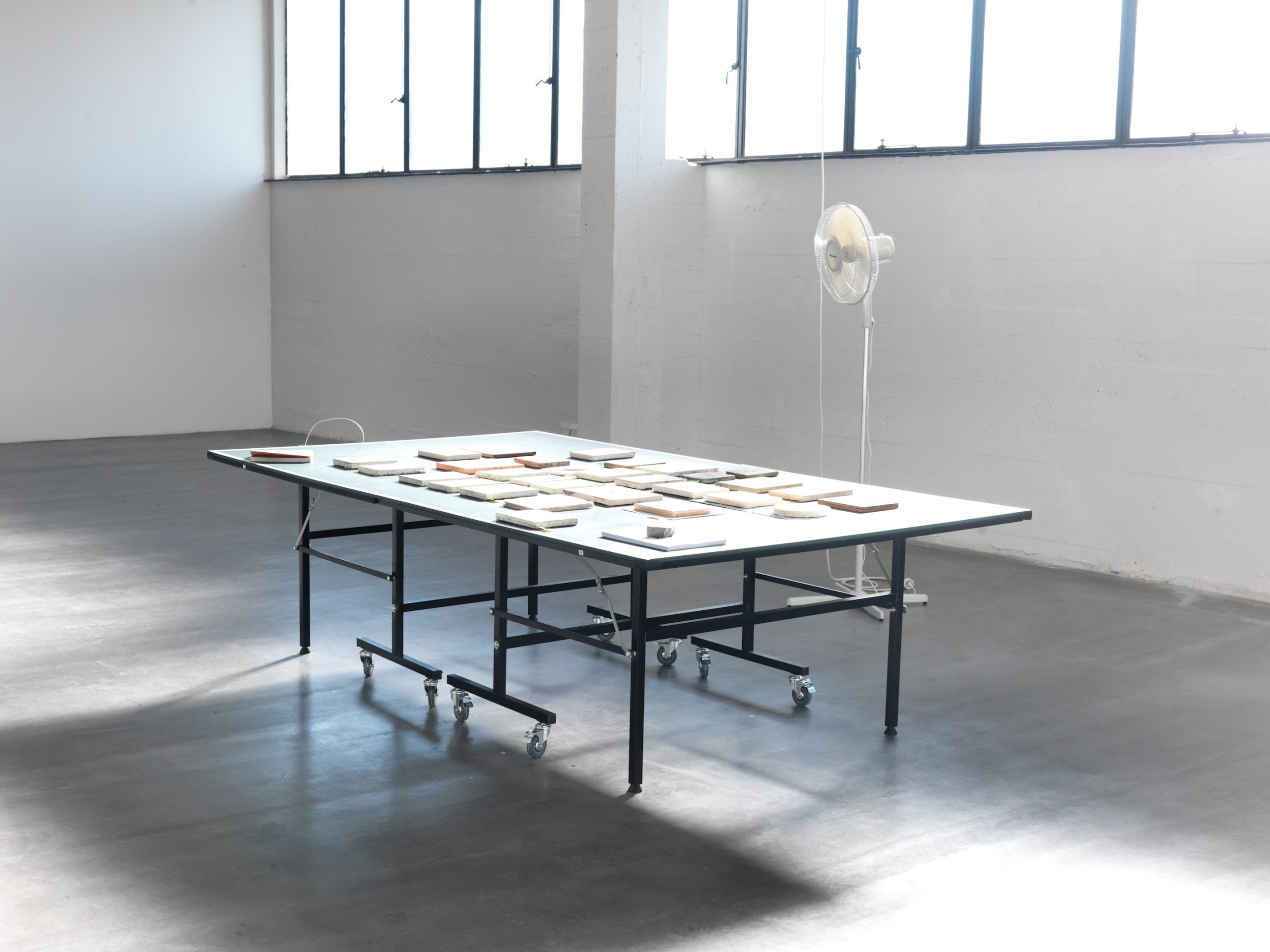 Touches of Games, a solo exhibition by Francis Alÿs will open today December 16 at Kuandu Museum of Fine Arts in Taipei. Alÿs will present a selection of video projections. In his curatorial statement, Chien-Hung Huang describes how "in the freedom of game, "children “come into contact” with the environment, skills in handling objects, and the mastery of interacting with their friends. Alÿs’ arrangement and camera lens in particular highlight the “role-playing” and “action decision” within a group, which is a sort of “politicalness” that comes naturally with the game. The “game” suspends all the limits of reality and allows them (and even us) to draw lines and cross them." The exhibition is part of the 2022 Kuandu Biennale Time of the Art Society: How to Become Indi-genous? and it will be on view until March 12, 2023.

Francis Alÿs will take part in the 7th Lubumbashi Biennial (DRC) which will open tomorrow October 6 under the artistic direction of Picha, an association founded in 2008, and joined by five associate curators, Paula Nascimento, Lucrezia Cipitelli, Bruno Leitão, René Francisco Rodríguez, Mpho Matsipa and curatorial advisor Ugochukwu-Smooth C. Nzewi. The biennial which was co-founded by artist Sammy Baloji, offers a vibrant public platform to local and international artists as well as cultural actors alike. Under the title ToxiCité or ToxiCity it will interrogate toxicity as a condition of existence that has inextricably affected social worlds. As a starting point, the theme will open the collective elaboration of a critical, transformative take on the social and cultural environment, in Lubumbashi and in the world. On this occasion, Alÿs will present works from his series Children's Games, some of which were filmed in Lubumbashi in 2021 and are currently also shown in the Belgian Pavilion in Venice. Children's Game #29: La Roue will be screened on October 6 in a basketball court in front of Picha Association. Other works from this series will be shown at the National Museum of Lubumbashi. The biennial will take place until November 6, 2022. 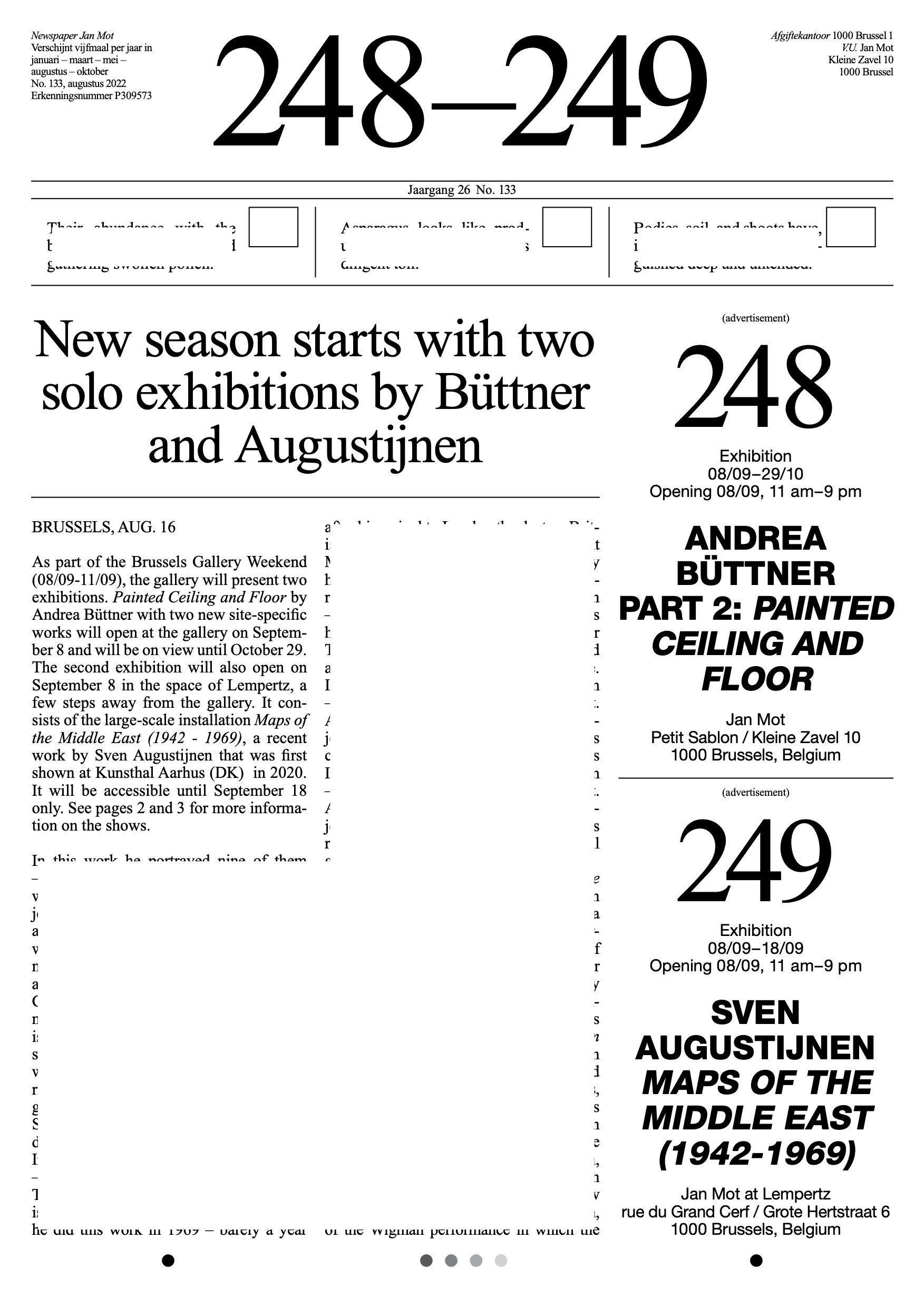 Jan Mot is pleased to announce that Francis Alÿs will receive the Museum Ludwig’s 2023 Wolfgang Hahn Prize. The award provides for an exhibition of Alÿs’ work at the Cologne museum in the autumn of 2023. The institution will also acquire his work for its collection.

“Of course I am much honored, and in these polarized times, receiving such an award is significant and invigorating, as it makes me feel that there is some coincidence of my own preoccupations and the public’s, and that a dialogue is possible,” — Francis Alÿs

The second publication - Francis Alÿs – The Nature of the Game is the official publication of the Belgian pavilion at the 59th Biennale di Venezia, curated by Hilde Teerlinck. The richly illustrated book contains Alÿs’ ideas and sketches he compiled in preparation for the Children’s Games, long-term projects which are now presented at the pavilion. It lets us glimpse into the engine room of his artistic practice, revealing key elements of his filmic poetics. An essay by the ethnographer and filmmaker David MacDougall embeds Alÿs’s observations of children’s play in the contexts of childhood studies as well as the history of ethnographic documentary film. 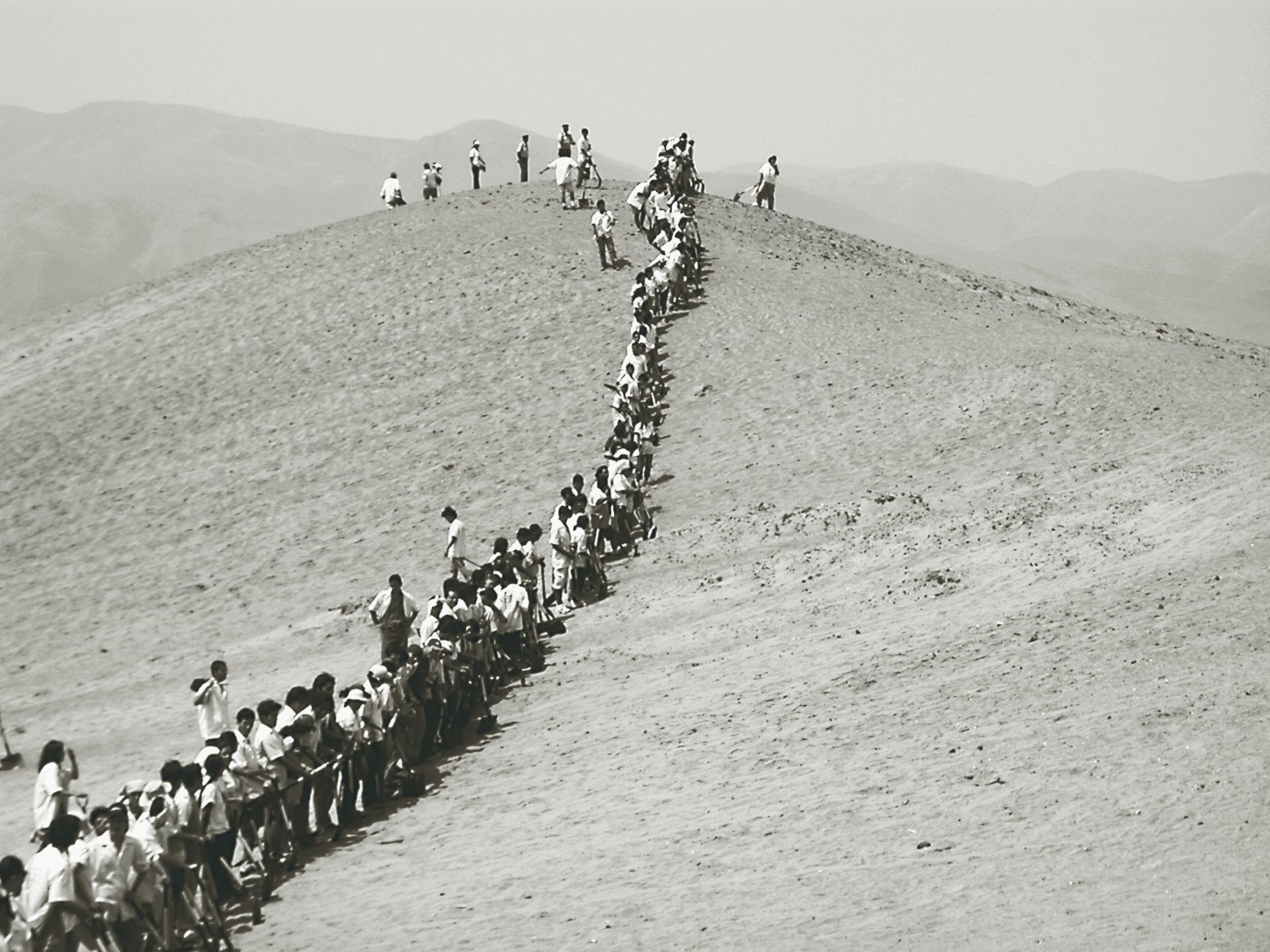 Francis Alÿs' work is part of When Faith Moves Mountains, a major group show presented on the occasion of the reopening of the PinchukArtCentre (Kyiv), 144 days after the beginning of the full-scale Russian invasion. The exhibition, whose title comes from the large scale project conducted by Alÿs in 2002, brings together works chosen from M HKA/the collection of the Flemish Community and focus on Ukraine as a country open to the world. (Image: Francis Alÿs) 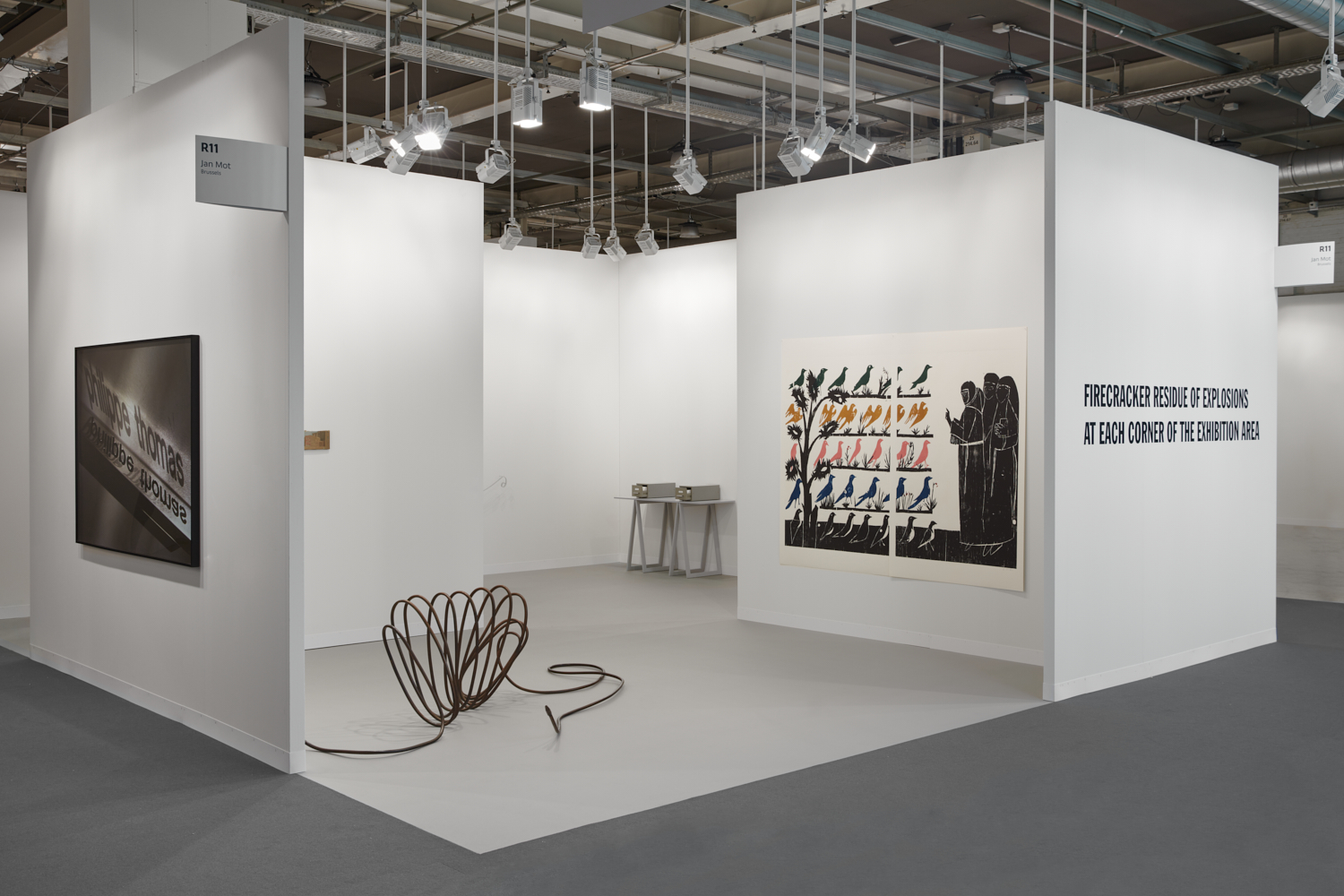 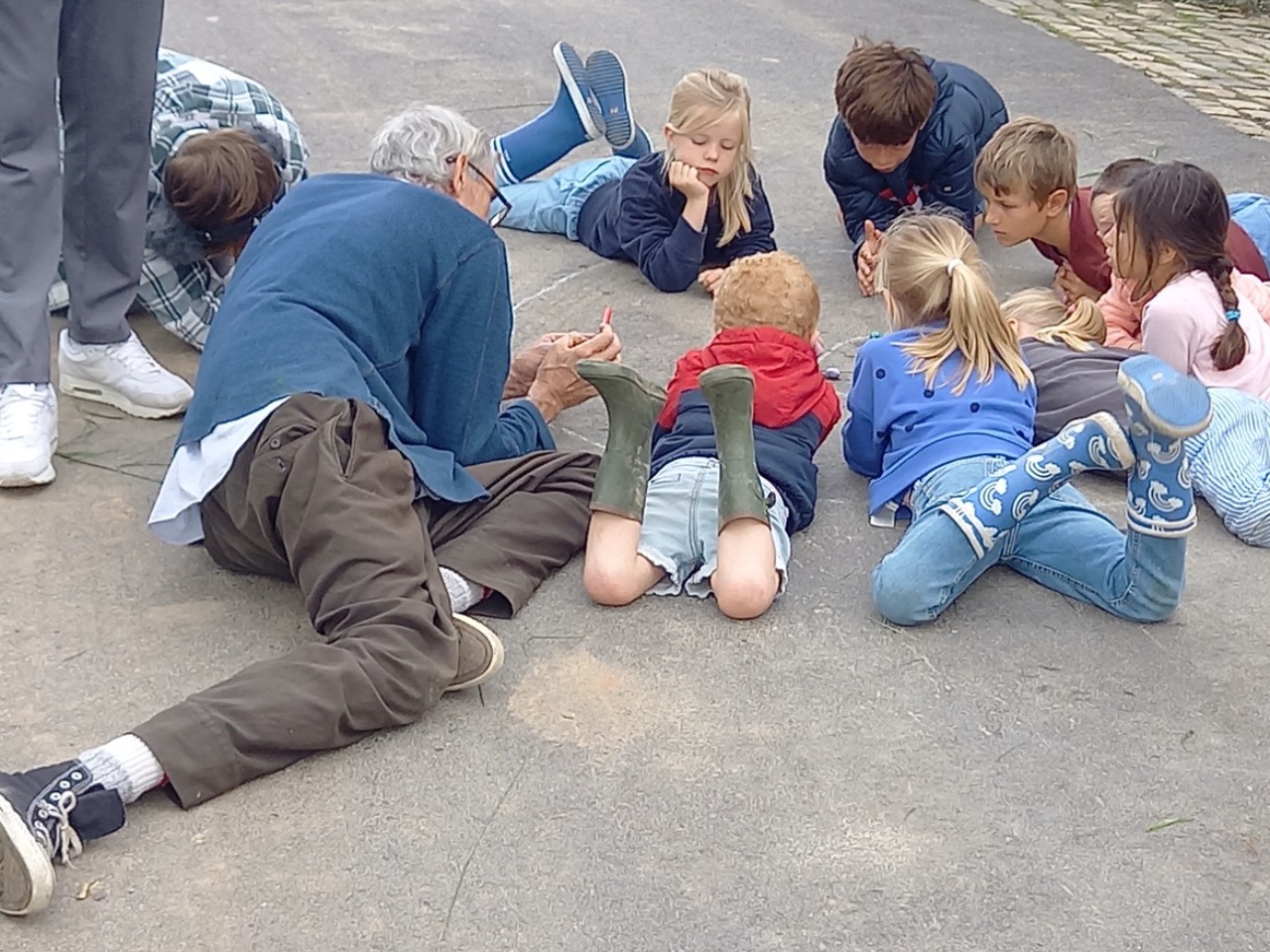 Francis Alÿs is presenting The Nature of the Game in the Belgian Pavilion (Flemish Community) as part of the 59th Venice Biennale, from 23 April to 27 November 2022. The exhibition curated by Hilde Teerlinck, will feature a selection of new short films related to his series of children’s games, a body of work started in 1999 which has gained a central position in his practice. The films were shot during Alÿs’ recent travels to Hong Kong, the Democratic Republic of Congo, Belgium, Switzerland and Mexico. Filming without interfering in the games, Alÿs reveals the hidden rules of playing, the ingenious interaction of the children with their environment, their deep complicity and their hopeful mood and joy. The installation in the Pavilion invites the visitor to walk through a labyrinth of screens as if they were in the middle of a global playground. The sound and image of the different films interact with each other, fragments forming together a whole, allegories translating the complexity of a sometimes harsh reality. A series of paintings covering a period from 1994 to 2021 accompanies the presentation providing the context in which some of the films were made. (Image: Francis Alÿs shooting Slakken, August 2021, Herne, Belgium.) 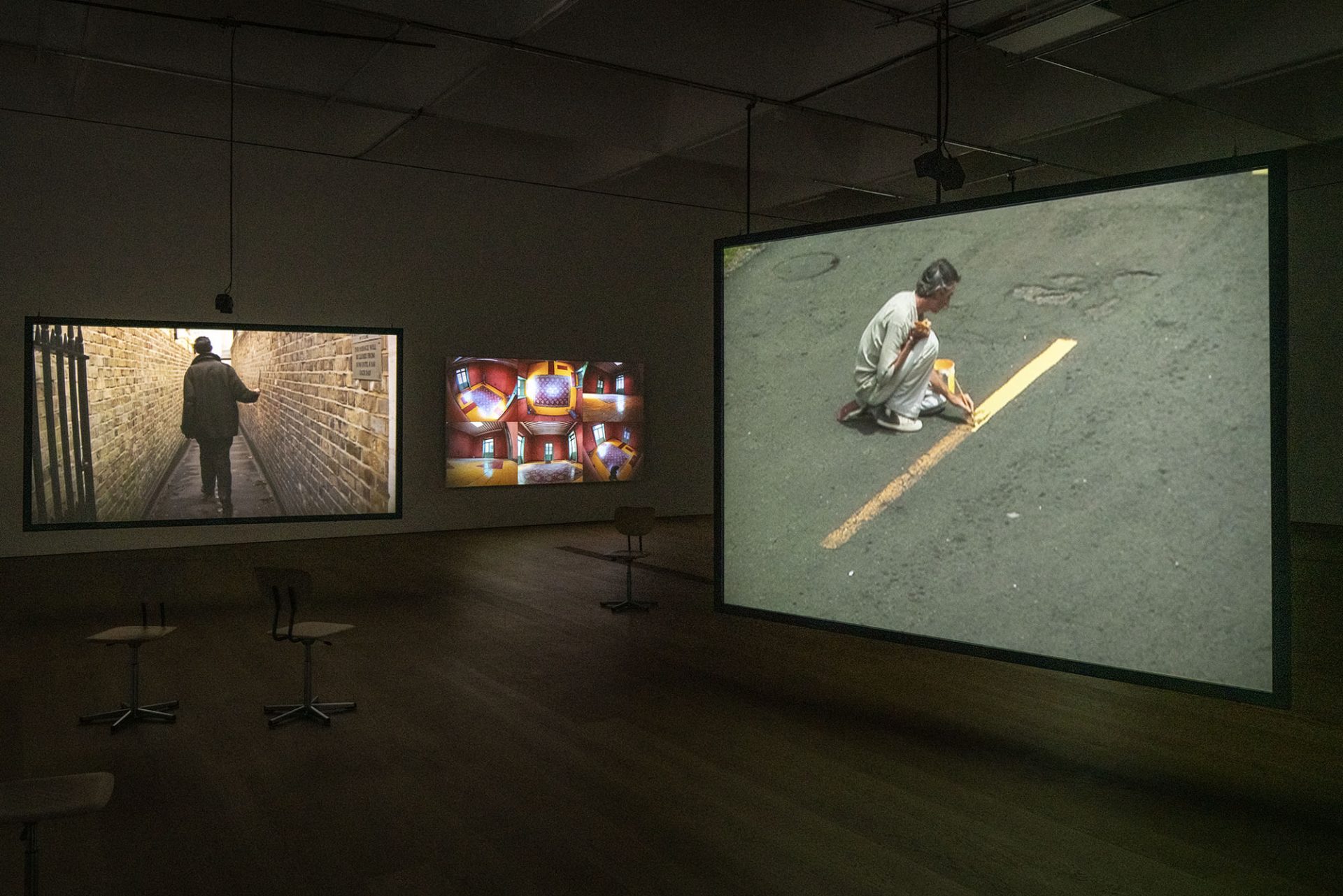 Francis Alÿs. As Long as I’m Walking (15/10-16/01) at the Musée cantonal des Beaux-Arts in Lausanne (CH) presents an overview of the artist’s video work of the last thirty years, with an emphasis on one of the central themes in his practice, namely walking. Through his seemingly insignificant walks, Francis Alÿs not only reimagines the city, he also creates narratives, spreads rumors, maps the social fabric of the place through actions that are sometimes short sometimes carried out over long distances or many hours, by turns dragging, pushing or carrying an accessory that stands in for a clue to reading the fable spun by the body in motion. While Francis Alÿs figures as a protagonist in most of his early videos, he moves behind the camera in a series of works begun in 1999, the Children’s Games or in Reel-Unreel (2011), one of the core works to come out of his explorations in Afghanistan. They are featured in the Lausanne show along with paintings and works on paper. A catalogue is published on the occasion of the exhibition: Francis Alÿs. As Long as I’m Walking, Nicole Schweizer (ed.). With texts by Julia Bryan-Wilson, Luis Pérez-Oramas, and Judith Rodenbeck, and an introduction by Nicole Schweizer. Co-ed. Musée cantonal des Beaux-Arts of Lausanne and JRP Editions, Geneva, 2021 (2 editions FR. and EN.). 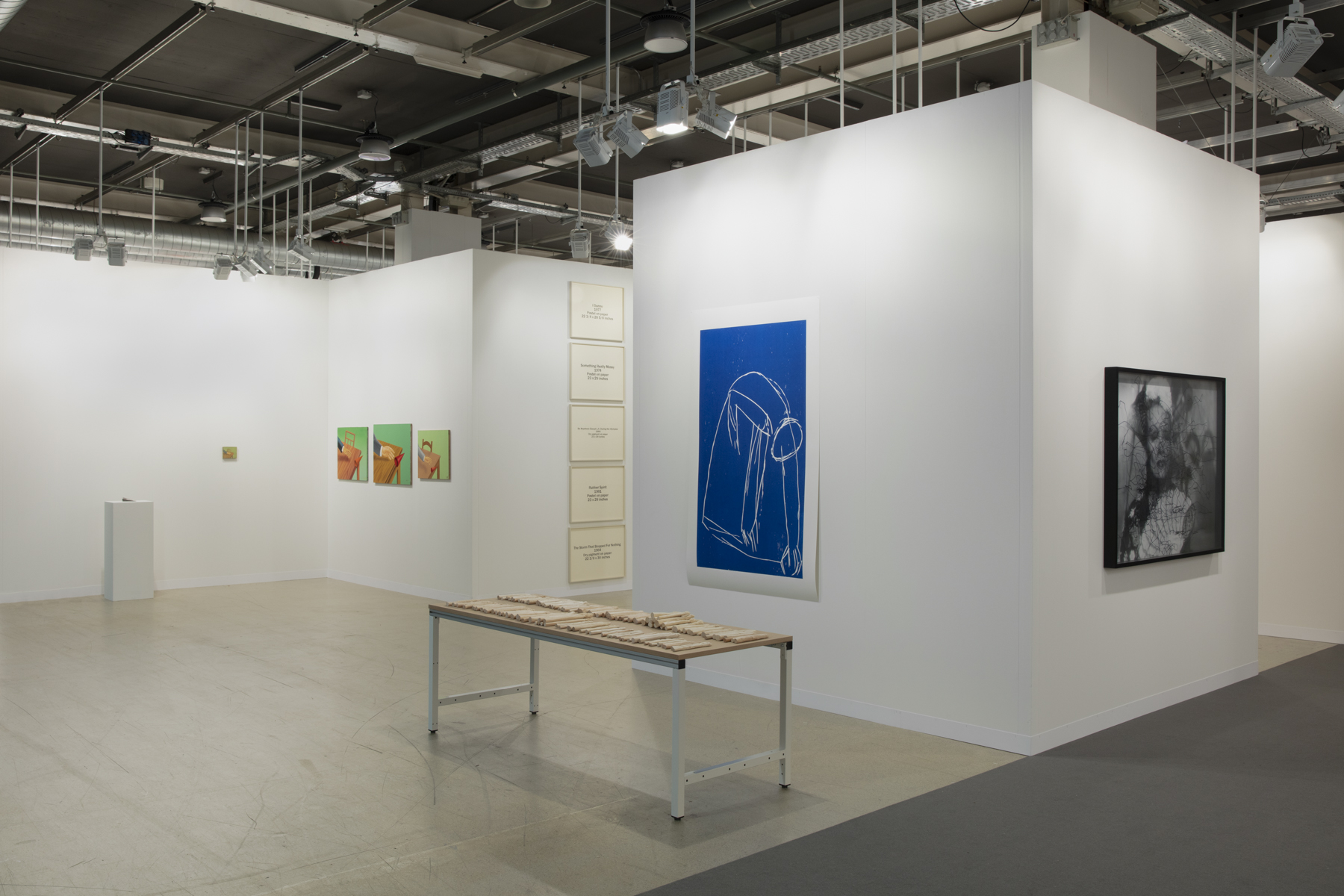 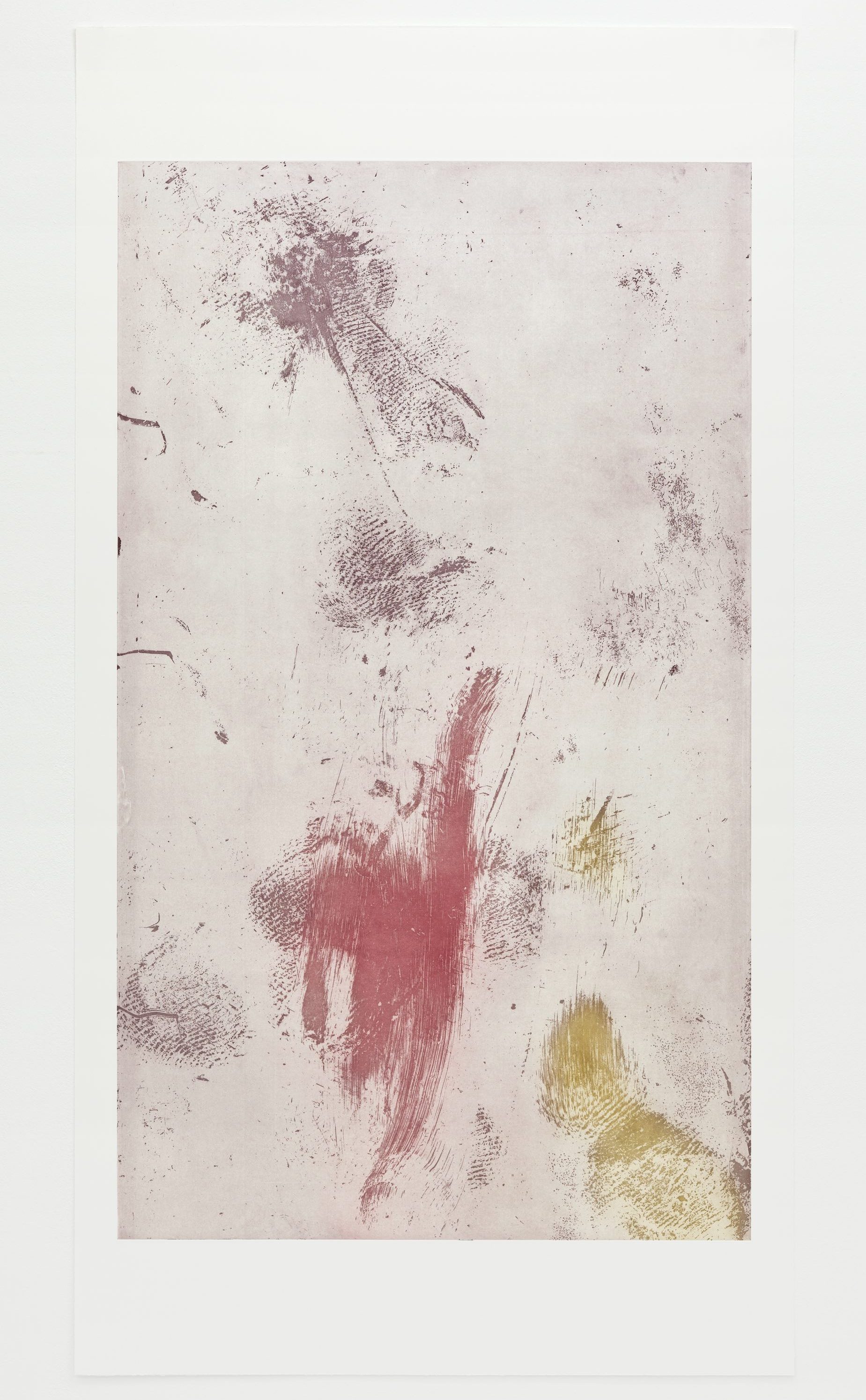 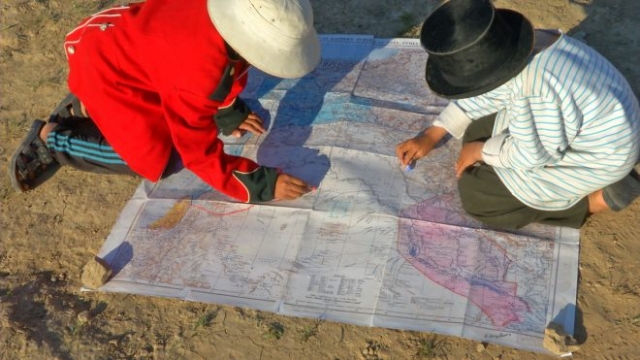 The film Sandlines, the Story of History (2018-2020) by Francis Alÿs was awarded with the “Best Feature Documentary Award” by the Olympia International Film Festival for Children and Young People.
Visit the festival's page to read more. See the trailer of the film on Francis Alÿs' website.

In the first days of the Covid-19 pandemic, an informal group of contemporary galleries from around the world came together to discuss how to navigate through the new challenges of the global crisis as it affected our artists, staff and businesses. As an expression of this unity we initiated GALLERIES CURATE.
GALLERIES CURATE: RHE (RHE from Greek for that which flows) is the first chapter of this collaboration, an exhibition and website themed around a universal and, we hope, unifying subject: water. RHE’s first project will launch on January 4th, 2021, with an online presentation of works by Francis Alÿs, Giovanni Anselmo, and Latifa Echakhch, extending the exhibition A buoy if not a beacon. Continuing in stages through May 2021, additional projects will be added by participating galleries each month.
Following the inaugural exhibition GALLERIES CURATE plan to invite new participants and add further curated chapters to a global conversation of thematic relationships between galleries, artists, and their audiences. 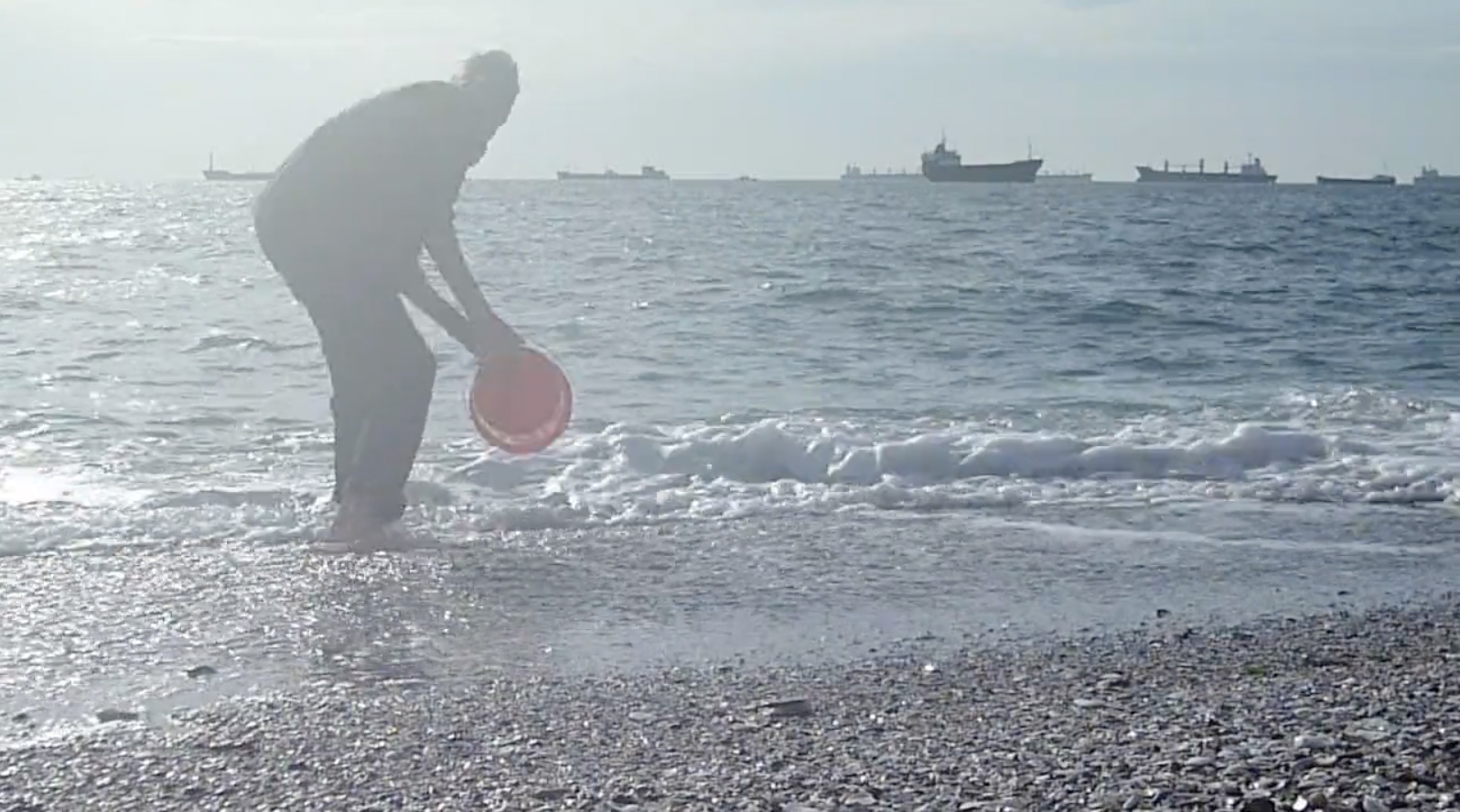 As a consequence of the new lockdown measures in Belgium, the gallery will be closed from 2 November till 14 December. Today you can still visit the exhibition 'A buoy if not a beacon' with works by Francis Alÿs, Giovanni Anselmo and Latifa Echakhch.
The exhibition will be extended till 16 January. 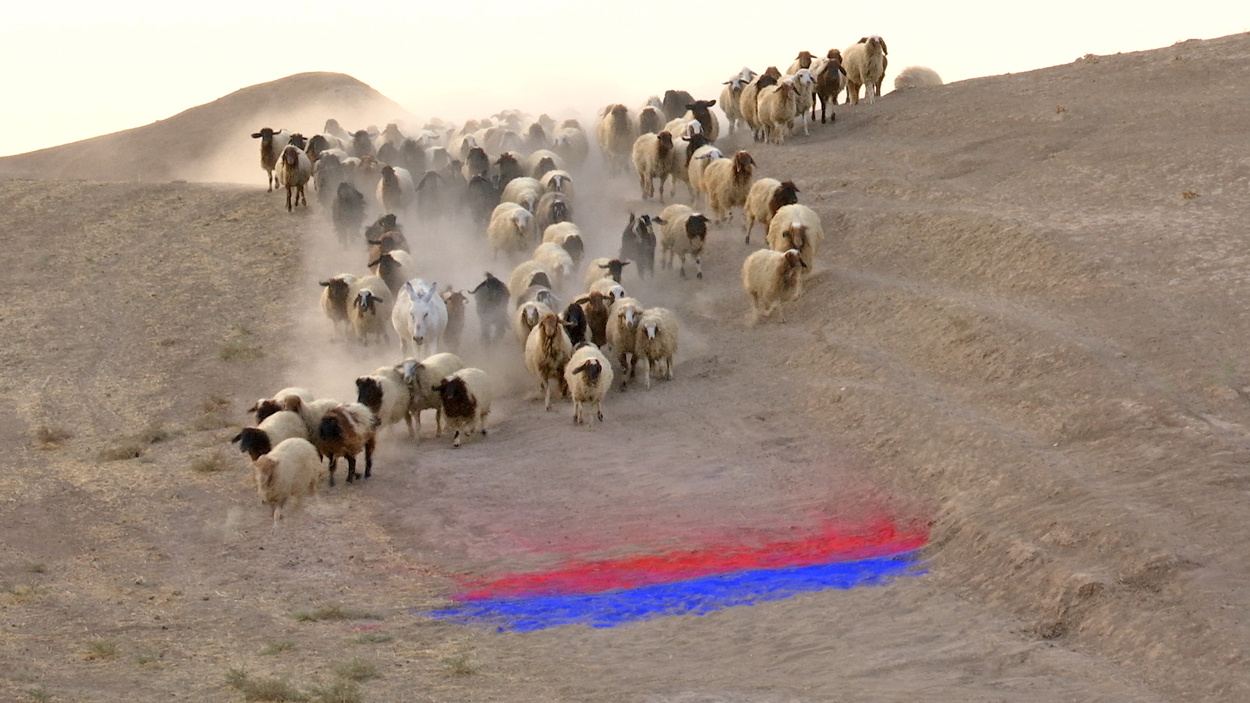 Sandlines, the story of history directed by Francis Alÿs has been selected for the International Competition of the 7th Porto/Post/Doc: Film & Media Festival, that will take place from November 20th to 29th, 2020. 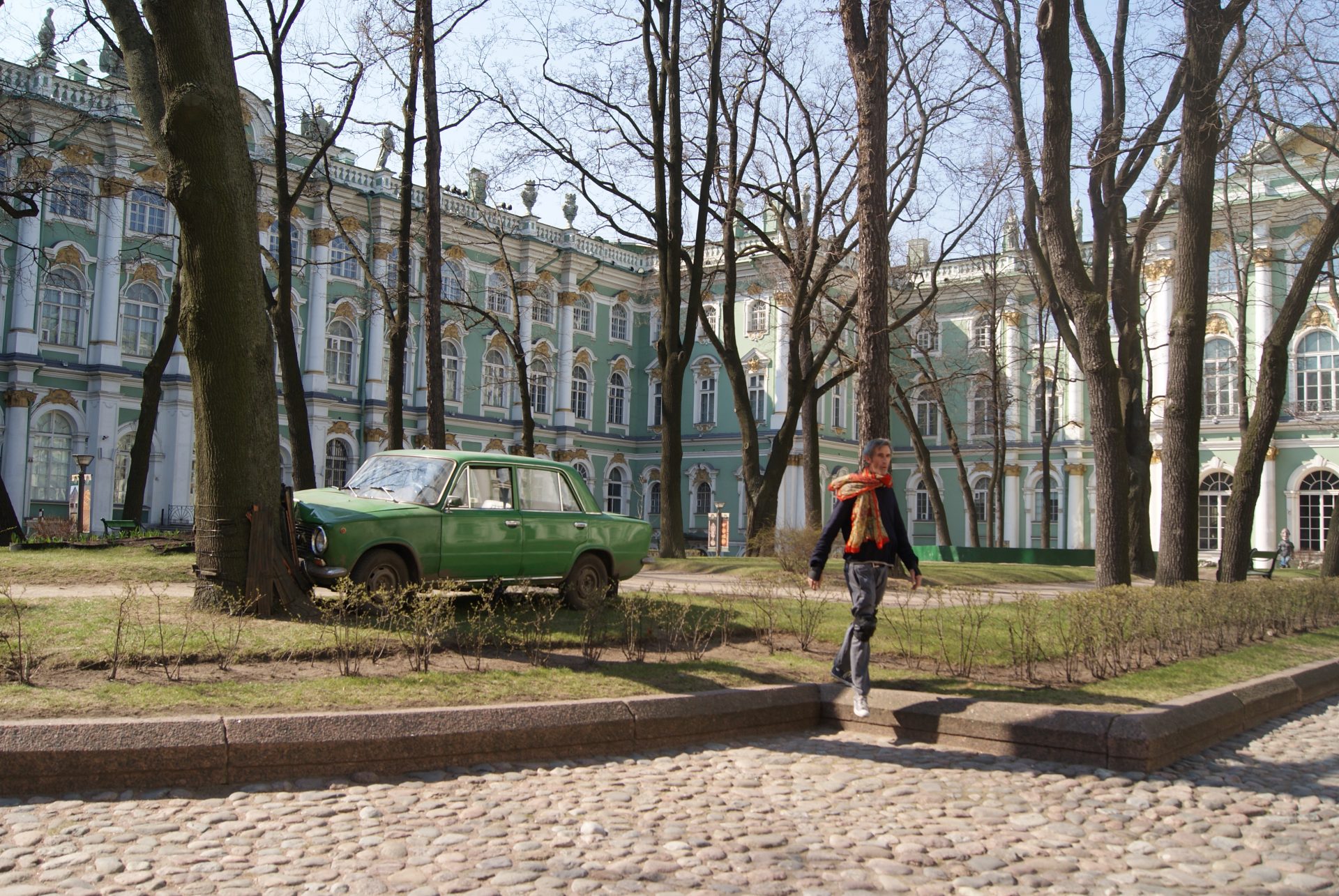 Curator Hilde Teerlinck and Francis Alÿs are selected to represent Flanders within the Belgian Pavilion for the 2022 edition of La Biennale di Venezia.

“Do We Live Because We Narrate?”, developed by Hilde Teerlinck and Francis Alÿs for the Belgian Pavilion will question the role of the artist and the relevance of art in situations of conflict and crisis.

“It is not a case of war journalism, but a chronicle of the tactics of living developed when the systems social / economic / governmental / you name it – are not operative anymore, circumstances where you find a moment of creation, of need and of tension. It is a chronicle of the way in which people develop strategies of survival in and after a situation of conflict.”
Francis Alÿs, Beirut, March 2009