Each Moment Presents What Happens (2021) was commissioned by Bristol Grammar School to commemorate the opening of the 1532 Performing Arts Centre, and to create a bridge between the schools separate artistic departments, the new theatre and wider audiences. In the film, the new centre is seen in the context of the historic building facades, its grounds and great hall. Testing the differences between educational systems, as well as what qualifies as knowledge, the project creates a dialogue between the School, founded in 1532, now selective, independent and fee paying and the defunct Black Mountain College, founded in 1933 specialising in liberal arts education. The Untitled Event was originally held in the dining hall of Black Mountain College and although Cage arranged time slots, the event was primarily informed by chance with activities taking place simultaneously. The event featured dance, painting, music, film, live readings and performance created by Merce Cunningham, Franz Kline, David Tudor, Robert Rauschenberg, Nicolas Cernovtich, MC Richards, Charles Olsson and John Cage.

In lieu of photographic or video documentation, the original happening lives on today through imprecise memories, audience testimonies and recollections. These contradictory memories, gaps in historical revision and the anonymity of Cage’s content serve as a proposal from which the students project, create and imagine. Experimenting across disciplines, the project encourages a practical and poetic approach to learning, which challenges the values of failure and success, process and outcome. Collectively, the students were invited to imagine what could have taken place around, before, during and after this event through dance, music, theatre, poetry, painting, philosophy, photography, dj-ing and film production. The project thus encourages a means of thinking the past through the personal, coincidental and relational. The work’s title directly quotes Cage’s Lecture on Nothing (1959), which becomes a poignant motif throughout the film. The performers recite this titular lecture as well as Cage’s Lecture on Something (1951) alongside poems written themselves. By revisiting Cage’s historical texts, the performers consider the meaning of improvisation, success, authorship and artistic autonomy in relation to everyday experience and chance events.

The work features a reconsideration of Cage’s Prepared Piano Pieces (1938-1954). The act of preparation was designed to contort the instrument’s sound by inserting bolts, screws, erasers and other objects between the piano strings. In this Cage sought ‘to place in the hands of a single pianist the equivalent of an entire percussion orchestra’, the prepared piano serving as a precursor to his later experiments with chance. In the film, participants collect material across departments, inserting a myriad of objects such as: toys, art utensils, cutlery, science equipment and office stationary. Notably, Cage’s Prepared Piano Pieces had been removed from the A Level music syllabus as the work’s ambivalent status challenged conventional academic assessment. The revival of this exercise, however, encourages the instrument to function as a site of collective ownership in a cross-disciplinary creation. By disrupting the piano’s configuration, participants relate to and interact with the object anew.

Formally, Each Moment Presents What Happens, is distinguished by its attentive negotiation of time. Taking place over a single day, the work’s sensitivity to the passing and structuring of time is redoubled by a self-reflexive approach to the camera. In the film, students are recorded preparing work, speaking publicly in the dining hall, and playing the piano, all as parallel performances embedded within the reality of the school day. Correlational performances occur within the black box theatre, recorded by a camera installed upon a track in a 360 degree formation. The lens observes the students’ action and supporting film crew in a circular orbit. This recording structure relates to Cage’s original event in which performers framed the audience, themselves seated centrally and facing outward – each viewer observing different systematised activity. The camera functions as both participant and structuring device, offering a viewpoint in the round which acknowledges parallel and peripheral action. In this way, the camera becomes comparable to a clock face or timepiece. Collectively, the students interchange their handling of the camera, allowing the speed of recording to be determined by the body. In permitting a different activity to enter after a number of rotations, the camera becomes an imperfect device to organise time. By physically relating to the camera’s movements in space, the performers become conscious of ‘keeping time’ only through a dynamic estimation and felt sense of its very passing. The project deconstructs the conception of recorded time as simply a line, limit or mark, the circularity becomes symbolic and encourages a thinking of time as a gyre, unsteady and oscillatory.

Billing’s work is proposed by Hollybush Gardens, our colleagues and guests at the gallery. This invitation follows our presentation at Hollybush Gardens of Sven Augustijnen’s Summer Thoughts, already in 2018.

Each Moment Presents What Happens is commissioned by Bristol Grammar School to commemorate the opening of the 1532 Performing Arts Centre. Produced by Josephine Lanyon in association with Bristol City Council. Supported by the University of the West of England. 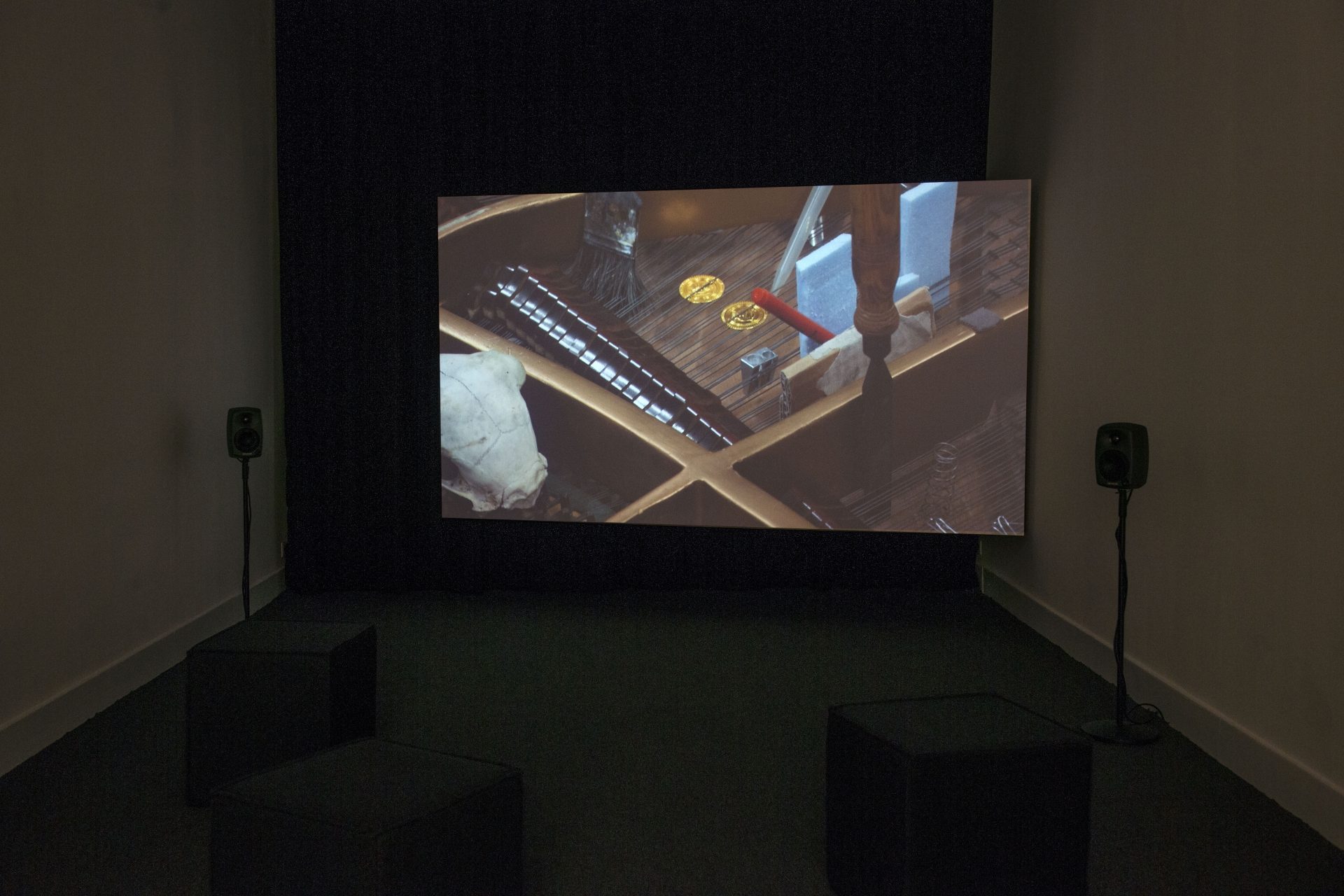 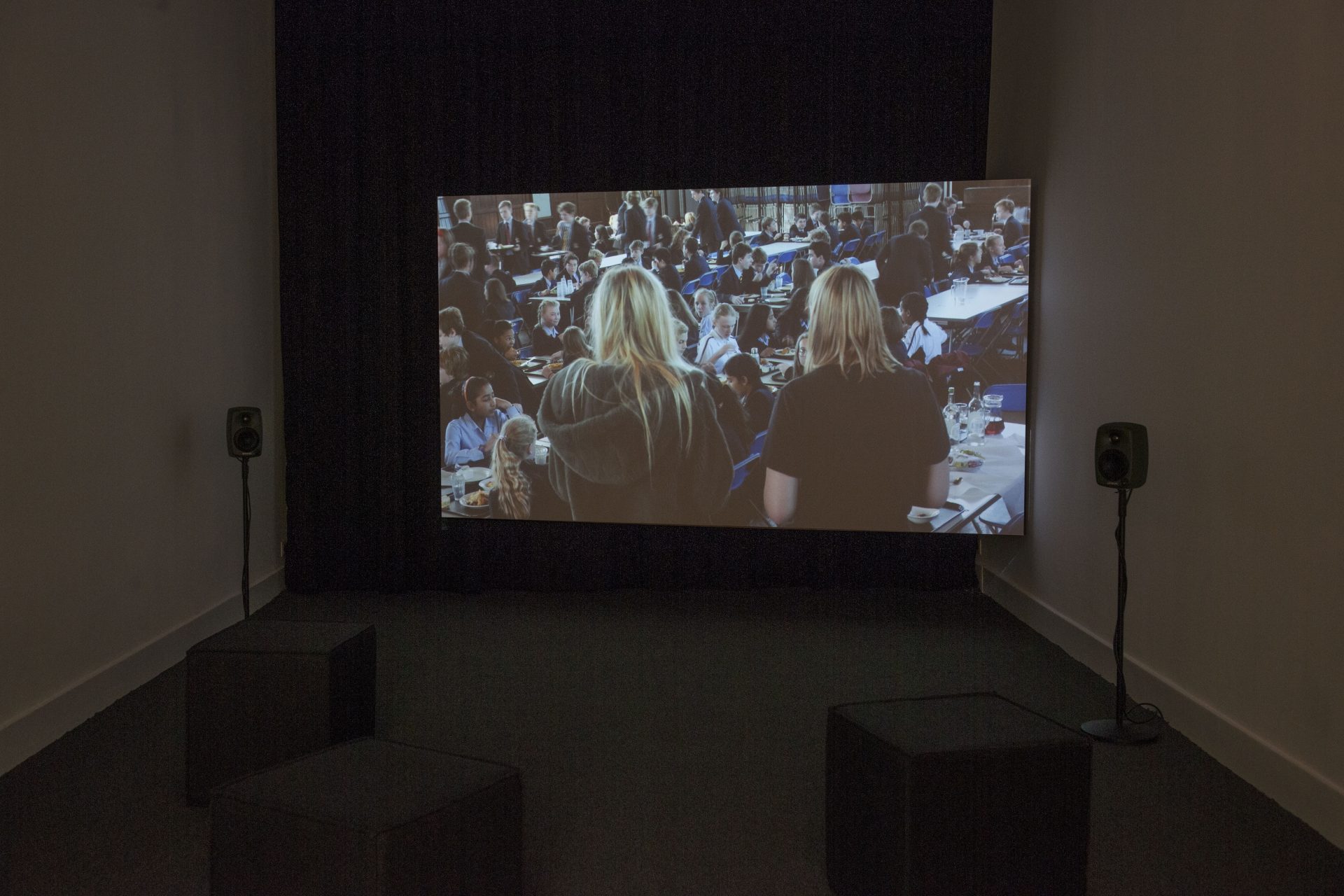 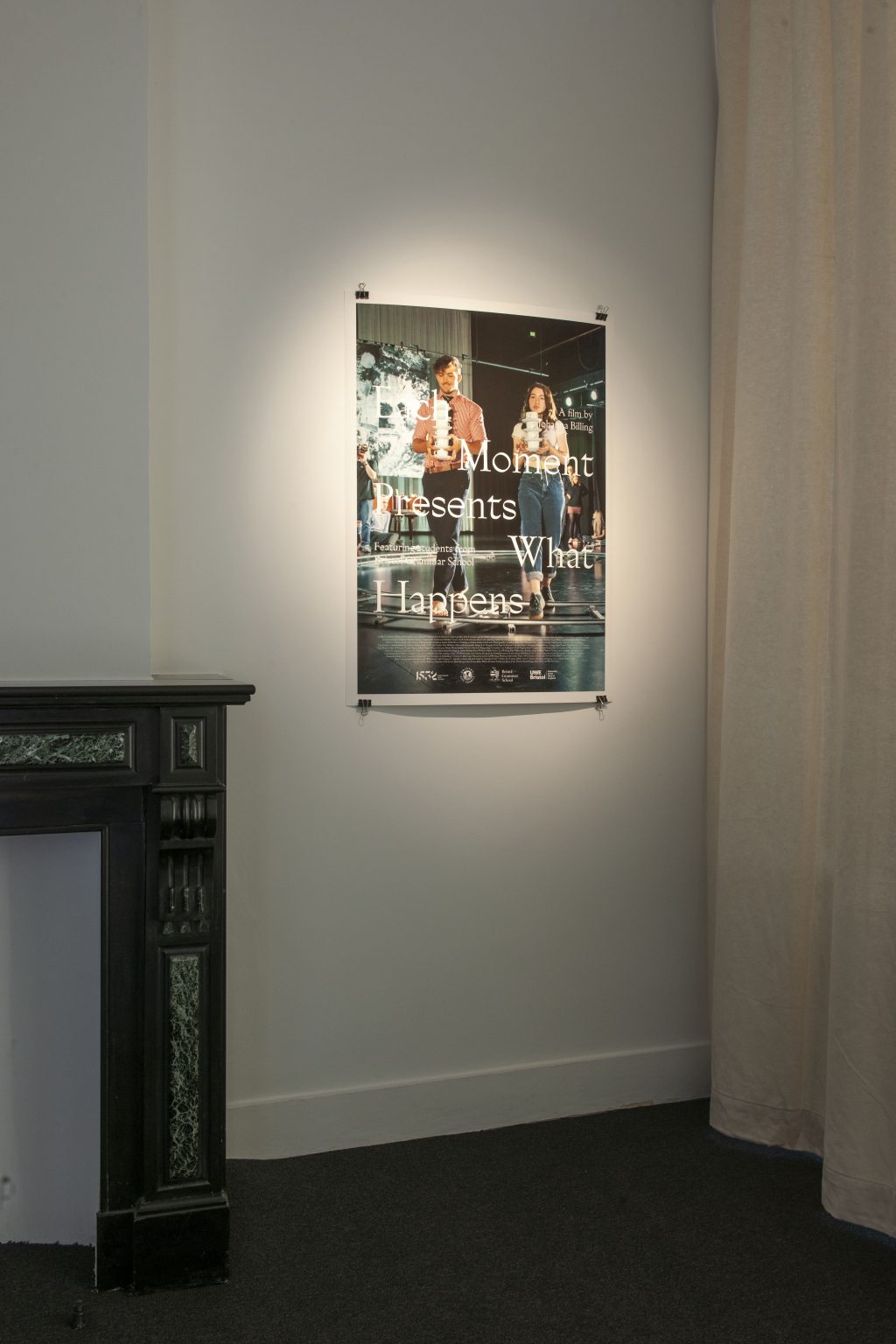 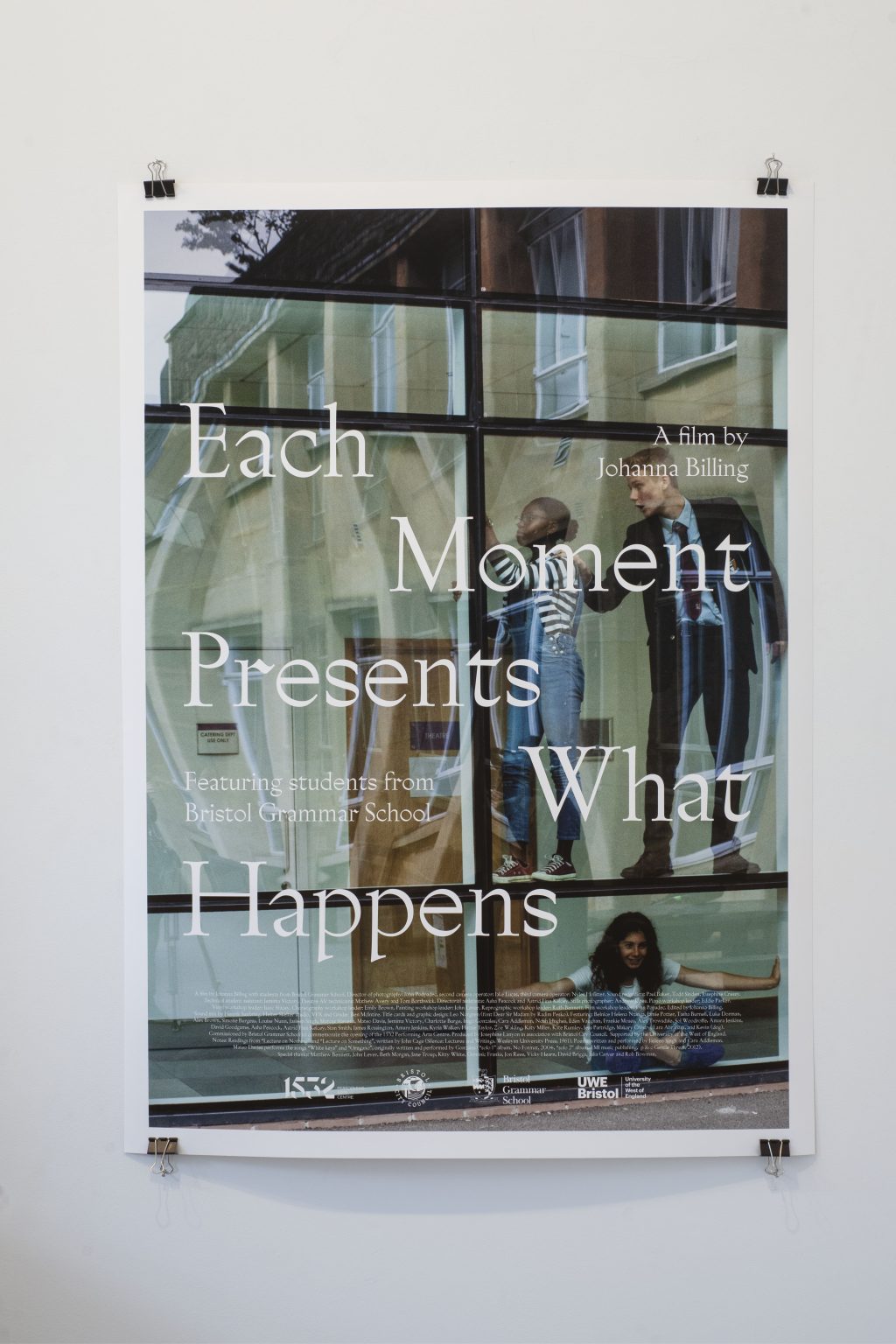 Each Moment Presents What Happens, installation views at Jan Mot, 2022