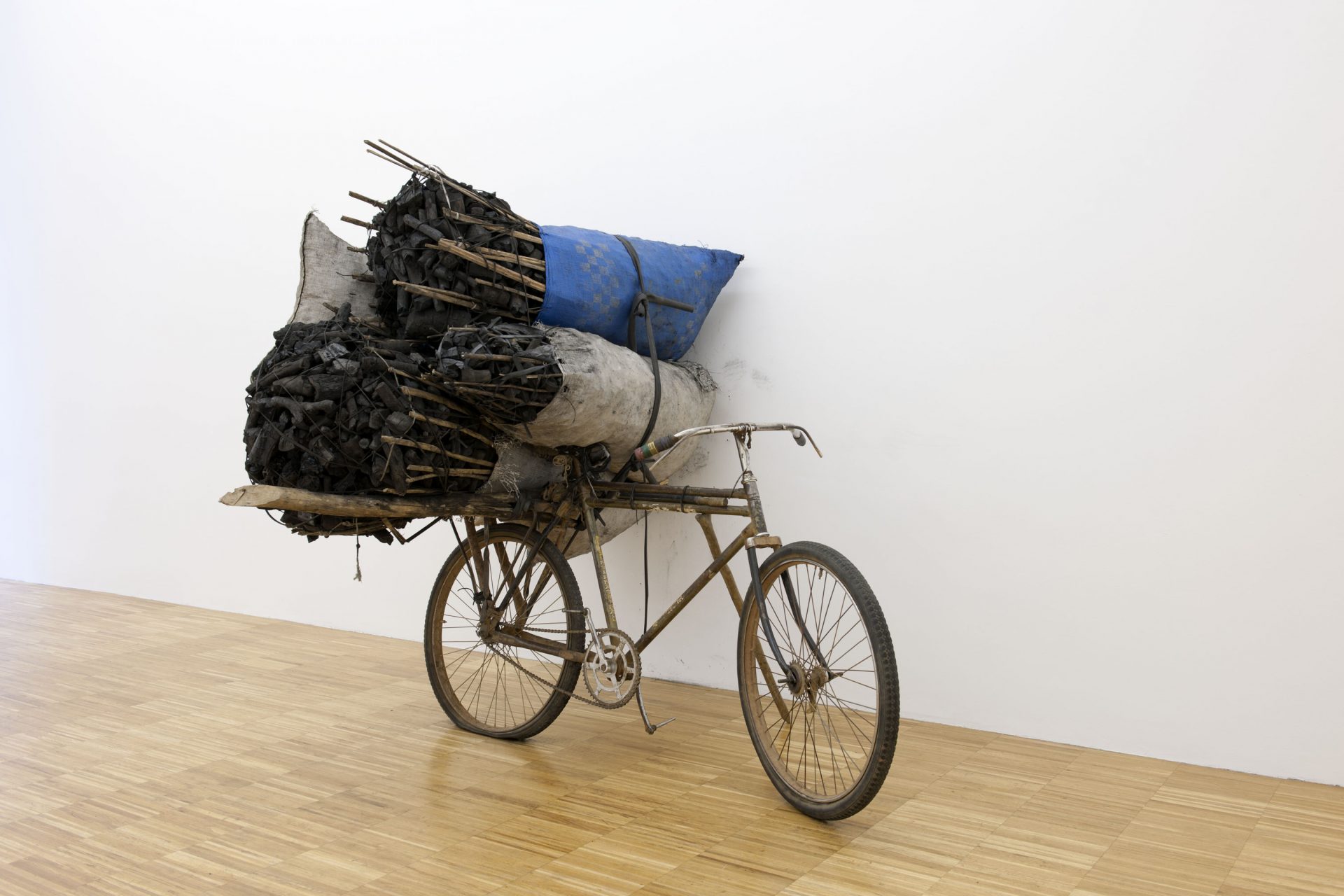 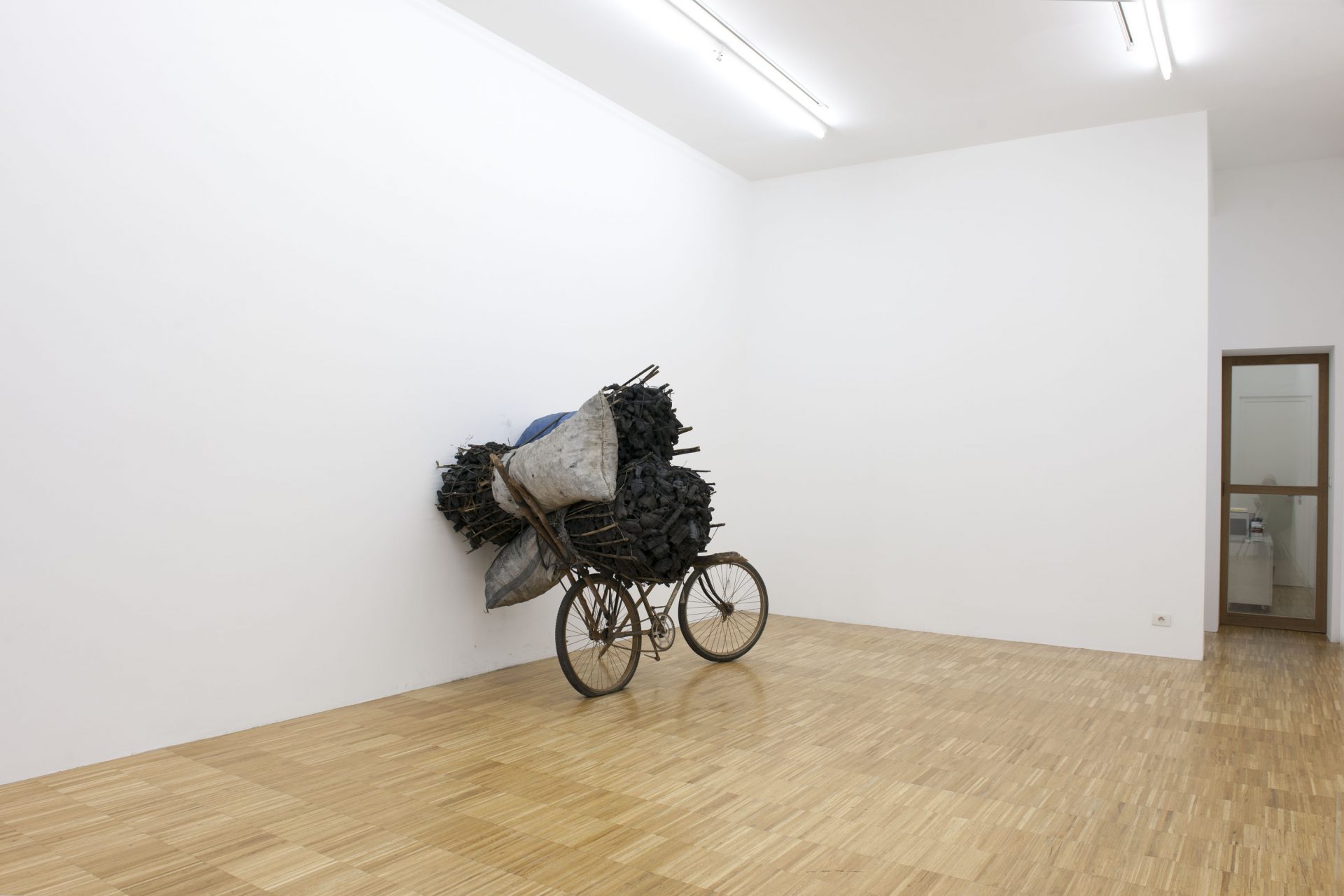 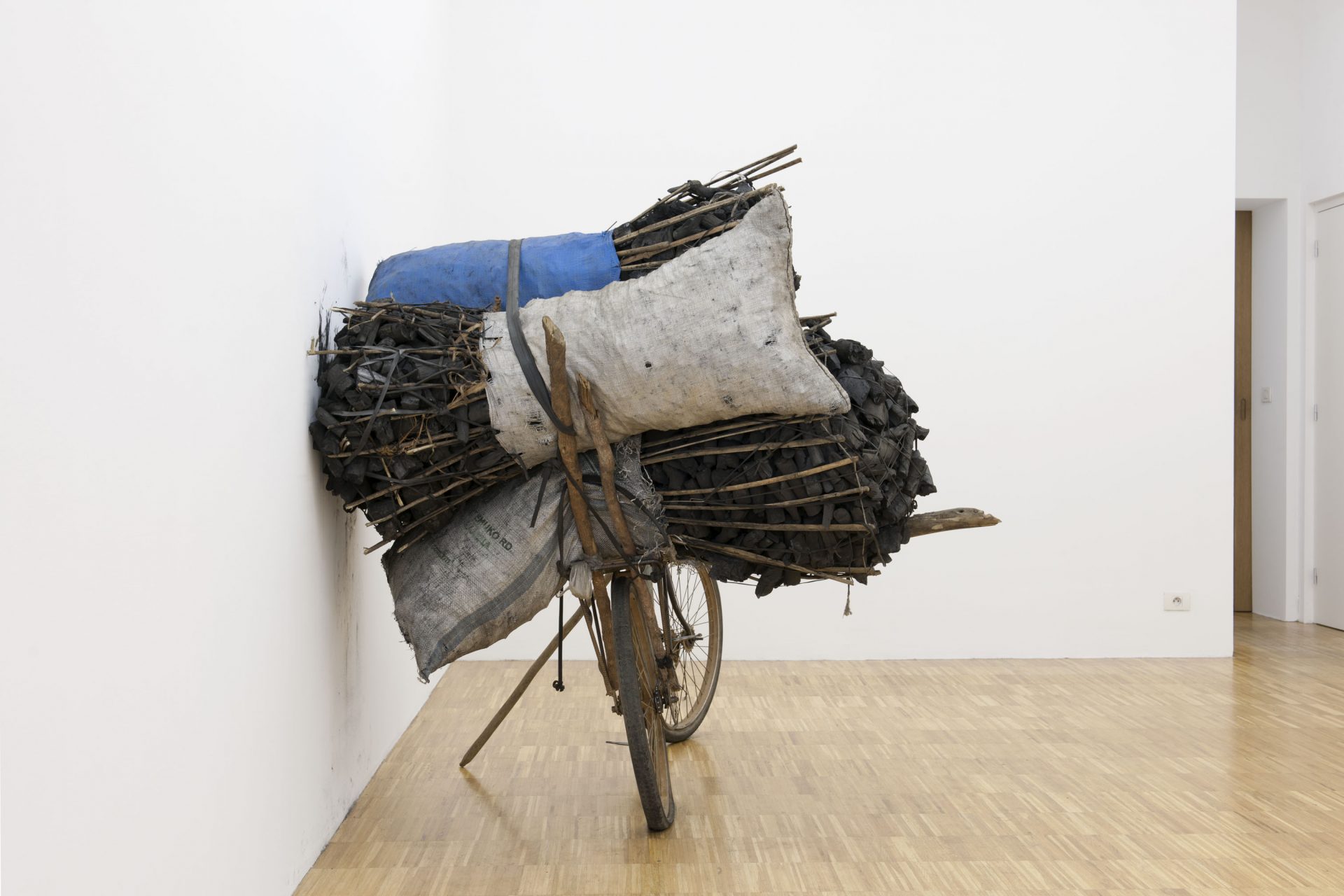 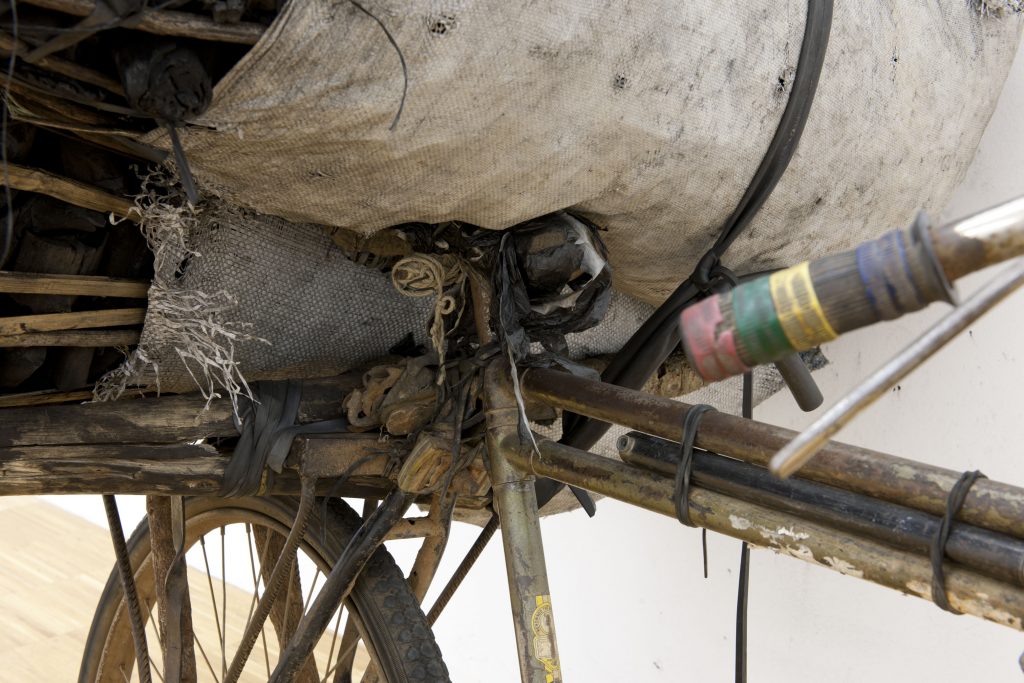 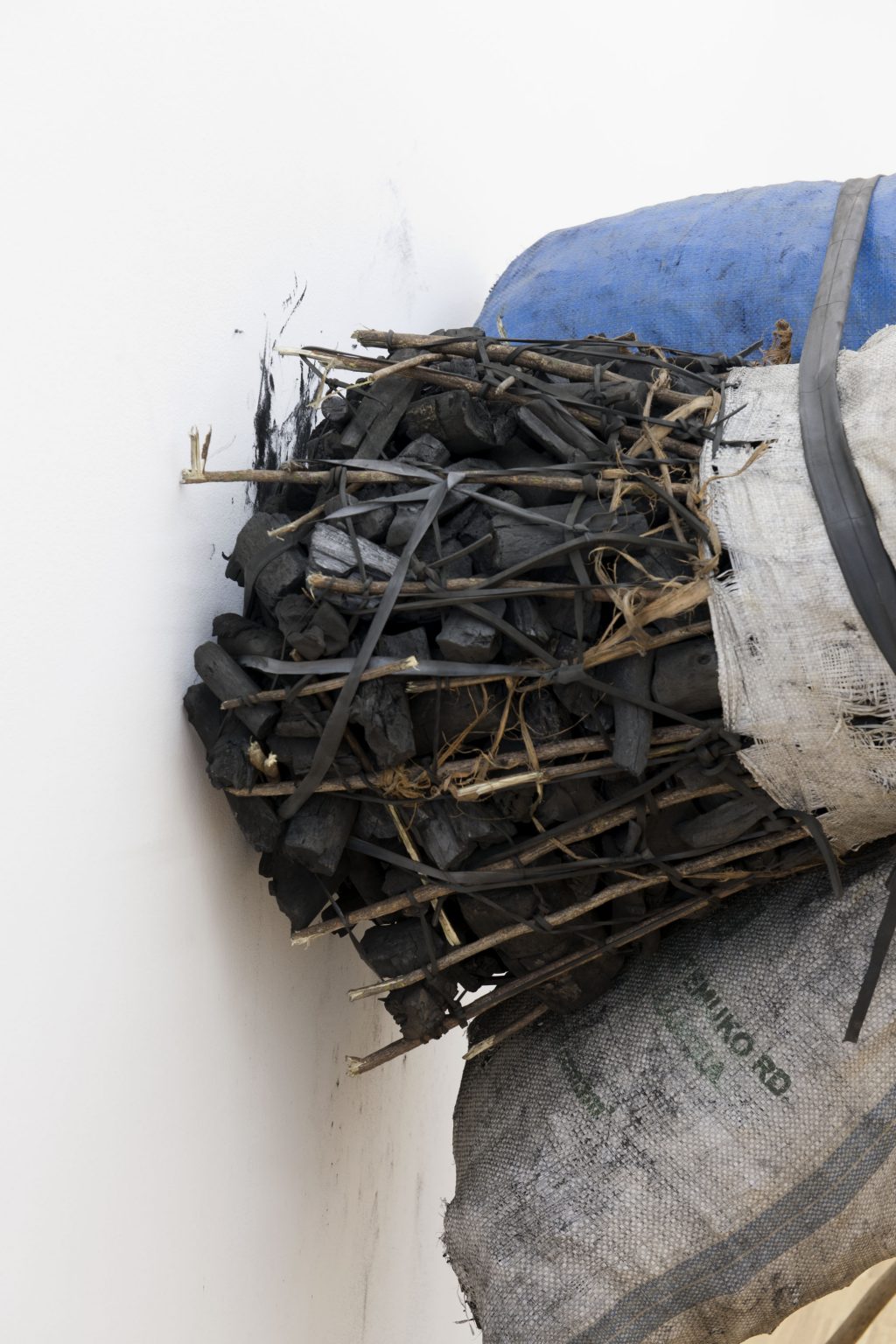 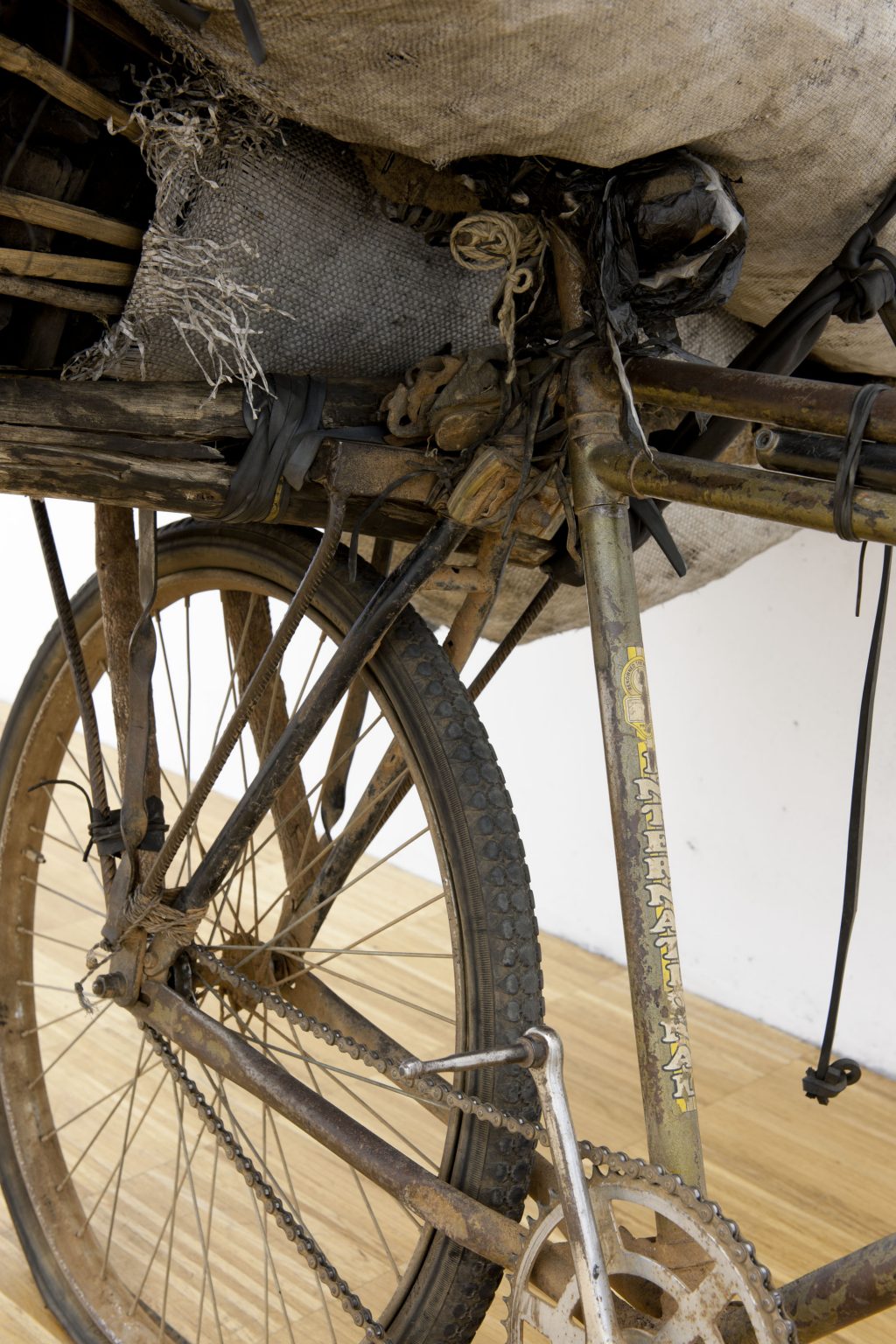 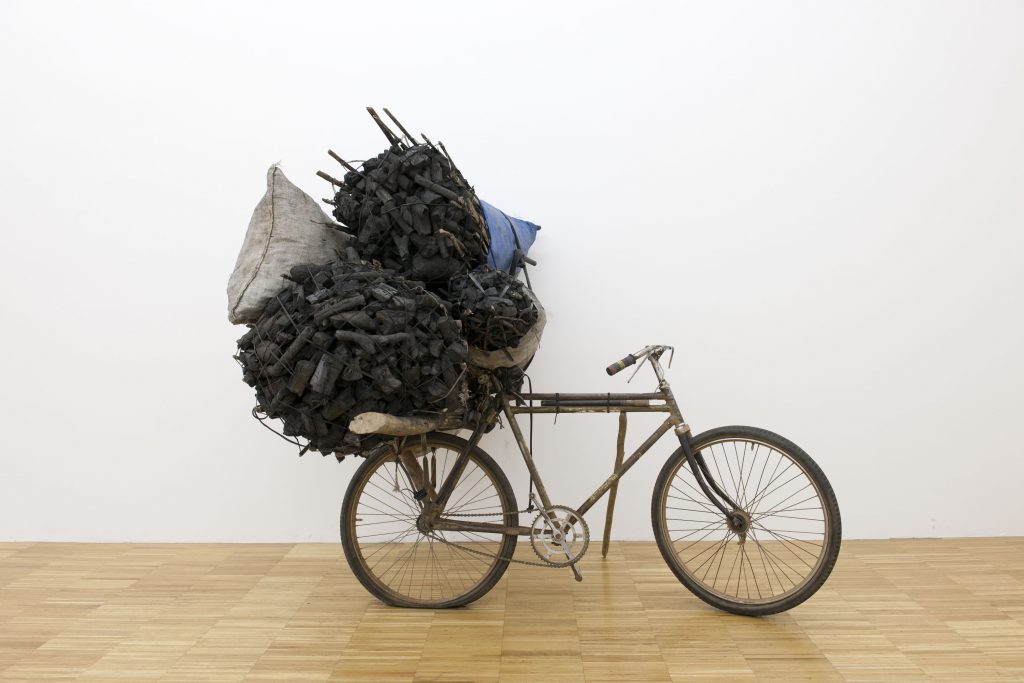 In mid-December 2009, on the last day of our trip to Congo to shoot my film Spectres, I was faced with a difficult decision : I either had to go with Sir Jacques Brassine de la Buissière and his wife, Martine Weidner, to an 11 AM church service in the Saint Pierre et Paul cathedral in Lubumbashi, and then go with them for a beer at the house of their friend Piet Moens, who had helped us the day before when we were looking for the precise spot where Patrice Lumumba was executed, or else go to buy a bicycle and a few bags of coal to put on top of it, like the ones we had seen on the road to Mwadingusha, where people who make coal had “cut and burnt”, “turned into makala”, “the tree against which the three prisoners Lumumba, M’Polo, and Okito were executed”, as a local villager had told us.  I finally decided for the second option and spent the day finding the bicycle and the coal bags, a wood worker to put it all in crates, and then sent it off to Brussels by air freight that same day, all the while thinking about the church service and the beers I had missed, but in the end, the crates never in fact arrived, lost somewhere between Lubumbashi and Kinshasa.  However, they resurfaced three years later thanks to the Ghent Fine Arts Museum, when the bicycle was shown this summer in the museum’s park, close to the ‘Moorken’, the sculpture of the first Congolese to set foot on Belgian soil, serving as ‘boy’ to the Ghent-born Van De Velde brothers who assisted Henry Morton Stanley during his exploration of the Congo river in 1874-1877, a sculpture erected for the 1913 Exposition Universelle et Internationale above a concrete cave looking over a waterfall that echoes the falls in Mwadingusha.  And this Internationale-brand bicycle with its coal sacks is now joined here, in Brussels, by a photo of the stairs leading to the entrance of the same Saint Pierre et Saint Paul cathedral but in what was then called Élisabethville, bastion of the Union Minière du Haut Katanga, which was taken during a funerary mass in honor of five Belgian officers serving in the Katanga police force, attended by then President of Katanga, Moïse Tshombe, his ministers as well as several Belgian personalities, on January 18th, 1961, the morning after the murder of Patrice Lumumba, Maurice M’polo and Joseph Okito, and the very day that Sir Brassinne, who was present at that funeral service, says he began the inquiry into the death of Lumumba that eventually led him to discover that some of the same Katanga and Belgian personalities had in fact been accessories to the executions on the previous night. (S.A.)